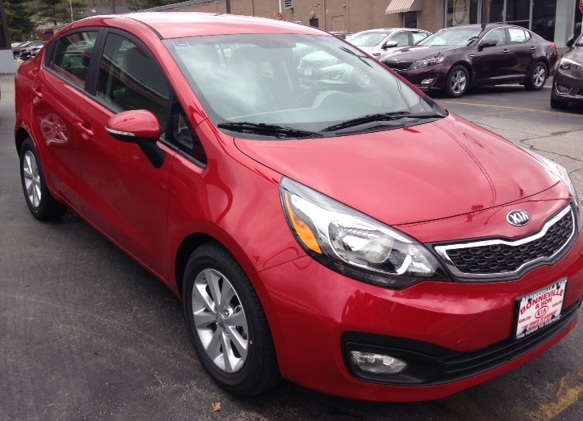 My wife and I both commute about 50 miles each day round trip, in opposite directions. We own two SUVs, but found ourselves spending so much money on gas and repairs each month. It only made sense to find a vehicle that was better on gas and newer than ten years old.

I couldn’t help but think, “What is it that we’re trying to accomplish and what do we own?” These are the questions to ask yourself. After all, buying a new vehicle is a huge investment, but do it right and the process will be a lot easier.

When you’re shopping for a new vehicle, keep in mind what your needs are and what it is you’re trying to accomplish.

Before the hunt, ask yourself:

We own a two SUVS. They’re both very good in inclement weather. They just tend to gobble up parts once in a while, and use a ton of gas. We had to have a vehicle that was low-cost and four-wheel-drive because we had to sell one of the SUVs that we own, or at least, so we thought.

END_OF_DOCUMENT_TOKEN_TO_BE_REPLACED

When the command is given to “Fire Em Up” during this years 56th annual Daytona 500; Austin Dillon will be behind the wheel of a number that his grandfather ran, but was also made famous by Dale Earnhardt. It’s a number that since Dale’s death had unofficially been retired until the right driver came along to carry on the legacy of the #3.

As the grandson of Richard Childress,  the time seemed right to  bring the number back to the NASCAR Sprint Cup Series and to place Austin behind the wheel. With a blessing from Dale Jr. and his sister Kelly, Austin had received a green light to run the number for the first time in over twelve years.

Someone may have been smiling down from the heavens, because during the time trials on Sunday, Austin Dillon went around Daytona International Speedway at a speed of 196.019 MPH which was landed the Dow sponsored Chevrolet smack dab on the Pole for Sunday’s race.

At the drop of the green flag on Sunday, there will certainly be cheers and tears from many race fans as they watch the number 3 lead the pack across the start/finish line for the “Great American Race”.

On my weekend adventures I’m always on the look out for those cool and weird creations that might make you scratch your head. While visiting a gift shop/auto museum up in the White Mountains of NH, I stumbled upon this 1954 Kompac Boat trailer.

Less than 200 of these fiberglass boat trailers were made. The back half of the trailer was crafted to resemble a 1953 Ford. The roof of this trailer was a row boat that was made to come off so that you could do a little fishing while you were on your weekend away for some rest and relaxation.

The only problem that I can see with this creation is that there was very little room inside, you had to crawl into the trailer to catch a good night’s sleep. Speaking of catch, if you had a great day of fishing, you’d better like the smell of fish, because the roof of your vessel was used to catch those fish so that you could eat supper that night while you were away.

All in all very few of these trailers are still known to exist today, and it’s definitely up there on my list of crazy automotive contraptions that I’ve seen.

On any given Sunday Dale Earnhardt Jr. was due to end his winless streak, and end it he did during Sunday’s Quicken Loans 400 at Michigan International Speedway.

He is to date the only driver to have completed every lap so far in the 2012 season, and has six top fives and twelve top ten finishes so far this year. It’s that kind of consistency that put Dale Earnhardt Jr. in victory lane on Sunday.

With 70 laps to go, junior’s car was hooked up and drove as if it were on rails. He was just flat-out fast on the restarts and was able to pull away from the pack on the high line.

With around 20 to go Tony Stewart was running second and said to his crew chief “Don’t worry, he ain’t going nowhere”. That statement proved to be wrong as Dale put a hurtin to the rest of the field with a five second lead on the second place car which was Stewart.

Dale crossed the finish line and all of Junior Nation rose to their feet in the grandstand to show support for Dale Earnhardt Jr.; It brought cheers and tears to many fans wearing green that day as their driver did a nice smokey burnout past the grandstand.

When he crossed the finish line in true Dale fashion, he radioed into crew chief Steve Letarte and said “I don’t know what to say”, Steve replied “You Really won it Dale!”.

On his way to victory lane he was meet win high fives and praise from his follow competitors, and also got on his cell phone to call team owner Rick Hendrick. Dale thanked him for standing by him and not giving up hope during the tough times. He was also greeted by president of NASCAR Mike Helton who congratulated Dale.

Dale’s win on Sunday wasn’t just a win, it was just a great “feel good moment” for NASCAR in which many fans banded together to celebrate with NASCAR’S most popular driver.

We decided to pack up the RV on Friday night and make the 8 hour trek down to Dover International Speedway,  AKA the “Monster Mile.”

If you’re a race fan and have never been to Dover, it’s worth the trip. We had an absolute blast at this track. The racing was awesome, and it was a pretty cool place to take in a cup race.

The first thing that I didn’t realise was how steep the banks were in the turns. At 24 degrees of banking in the turns, and 9 degrees on the straights, it’s almost like a mini Daytona. Watching the race on T.V. doesn’t give the track any justice, when you go there in person, then you know why it’s called the “Monster Mile.” This track chewed up stock cars and spit them out.

The big one happened on lap 9 when Tony Stewart and the 83 tangled coming out of turn 2. The two cars spun blocking the entire speedway causing a 12-13 car pile-up. With nowhere to go, one car slammed right into another down the backstretch. They had to red flag the race for a while to clean up the carnage off of the track.

The two Busch brothers, and Jeff Burton all suffered blown motors as a result of trying to tame the monster, but their cars would have no part of it as one by one their motors decided to expire.

Jeff Gordon seemed to have the only car that could catch and pass the 48 Lowes machine of Johnson. However once again Gordon’s bad luck of 2012 continued when he left his pit stall and reported a loose wheel over the radio a few laps later, which forced him to pit under green. He came back out of the pits in around the 21st place, and luck never really seemed to be on his side to help him make his way back towards the front of the pack He finished 13th for his efforts.

There was no stopping Kevin Harvick, as he also challenged Jimmie Johnson for the lead. He even had to pick his way back through the field after missing his pit stall on pit road, and then had to go all the way around the track to try it one more time so that his car could get serviced by his pit crew. Harvick took home a second place finish.

On of the things that I had to laugh at (or didn’t expect) was that when we pulled into Lot 10 to park the RV, everyone was mowing their lawn. It was pretty comical, to see everyone with red lawn mowers strapped to their motorhomes. In NH the fans all have Radio Flyer wagons to haul stuff to the track.

The Nationwide series kicks off the weekend tonight at Richmond International Raceway. Travis Pastrana is set to hop back in the saddle once again to make his Nationwide debut, after is was postponed due to an X Games accident at the Los Angeles Arena last year while doing a trick on his dirt bike.

His ankle was shattered into about 20 pieces during that accident, so it wasn’t your typical break. It has taken Pastrana about 9 months to recover from his injuries and countless hours of rehab.

Travis said that he has been spending a ton of time in the iRacing Machine track simulator, to try to prepare for the Virginia 529 College Savings 250 that will run tonight at RIR.

Pastrana also went on to say that he’s a little more prepared now then he would have been last year, and that he didn’t fully understand the language that the drivers use to describe set-ups and how the car may be handling. During his time off he watched more of the sport to educate himself on what the drivers were talking about when describing different scenarios and situations.

Another thing that they had to fix was, when Travis sat in the cock pit of his race car they had to relocate the gas pedal in relation to his repaired ankle so that he could get on and off of the throttle easier while out on the race track.

He said that he would he happy to finish his first race and to stay out of trouble by not hitting the wall or a fellow competitor.

With 30 to go, Denny Hamlin put the hammer down, and passed Martin Truex Jr. who led 173 laps of Sunday’s STP 400 at Kansas Speedway. Truex Jr. tried to dive to the inside twice on the last lap to make a winning move on Hamlin, but wasn’t able to make it stick.

Much of the race was ran under cloud cover, but once the sun decided to poke through it seemed to have changed the complexion of the race. While the sun was shining on the track it was also shining on Denny Hamlin. Denny said that his car was tight in the corners while it was cloudy out, but once the sun came out late in the race, it made the track a little slippery which was fine by Denny, he was finally able to gain ground on the 56 of Truex that was dead ahead.

Under the cloud cover track position seemed to be oh.. so important, the easiest way to pass the guy in front of you was in the pits. Once the clouds gave way to some sun, set-ups that other guys had dialed in seemed to come to life, and the race was on.

Clint Bowyer was hoping to have a better day than he did, his motor decided to expire during the race along with teammate Mark Martin.

Other drivers whose motor decided to go south were Jeff Gordon, A.J. Allmendinger, Bobby Labonte and Kurt Busch. Yes that’s a pretty hefty list of drivers who had engine woes.