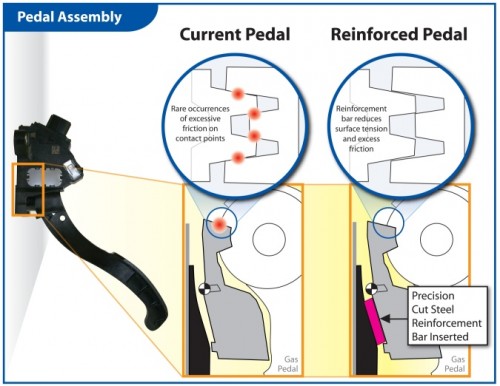 The Toyota Press room is reporting that they now have a fix for the gas pedal sticking problem.  They will be adding a “precision-cut steel reinforcement bar” to the gas pedals to reduce friction within the pedal that on rare occasions, could cause the pedal to stick.

Drive-by-wire failure was inevitably going to happen at some point, it was just just a question of  which manufacturer it would be.  Toyota was the unfortunate winner of this fail-contest, but their immediate reaction (from what I saw) is commendable in my opinion.  They not only halted the sales of the effected models (huge money lost), but they even stopped production on new vehicles until the solution was in place (massively huge money lost).  So although this issue was clearly a serious one that affected a lot of people, Toyota deserves a pat on the back for locking down the problem and correcting it in timely fashion.  Maybe I would have a different opinion if I owned a new Toyota with a sticky gas pedal. Though, I think would probably just push in my clutch pedal, instead of crashing 😉 Call the “precision-cut steel reinforcement bar” a shim if you want, but hey, if it works, it works.

Image from the Toyota Press Room.