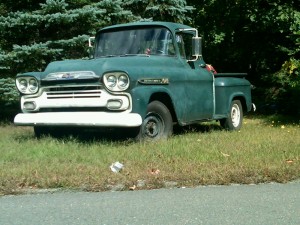 Seeing cars and trucks used for their intended purposes does wonderful things for me.  I like seeing trucks hauling heavy stuff, Mustangs and Camaros being brutally launched at the drag strip, and pricey exotics ripping at the corners of a road course.  It’s refreshing.  When I went to the SEMA show a few years ago, I remember being absolutely flabbergasted that people in Nevada still drive around old cars daily.  Not as show cars, but as regular vehicles.  Ah…. The beautiful thing about the dry climates…..  rust isn’t desperately clawing at the bottom of your car trying to pull it back into the earth.   As long as the engine stays spinning, and the seats don’t turn into dust, you should be able to drive your 75 Malibu as long as you want.  I love this.  These old cars that are driven daily and used for a purpose often lack some of the pinache’ that show cars have, but they have features that can’t be bought or built, it’s called character.

In my neighborhood, there is an old 58-59 Chevy truck that looks like it gets used for typical yard work, and “around town” type things.  It has more character than any other car in town, and it’s tough to pinpoint why.  It just looks sooo right from every angle.  If I ever were lucky enough to own this truck, I don’t think I would change a thing about it. It is perfection.

What’s in your neighborhood?