Jacking up a car takes careful thought and process. Raising and supporting the vehicle might seem confusing or scary. If you jack up from the wrong area, it can damage parts or harm whoever’s working.

We also have many videos that show where to put jack stands on specific models.

Steps to Take Before Raising the Vehicle

What to Do Before Jacking Up a Car or Truck

What Does “Support the Vehicle with the Suspension Hanging” Mean?

Can You Lift the Vehicle without the Suspension Hanging?

Some vehicles can be lifted without the suspension hanging—especially ones with straight differentials that extend to either side of the vehicle, like a pickup truck.

What Is a Full Frame?

Full frames are generally found in pickup tucks. They’re more heavy duty than subframes, are likely to be made of steel, and help with tow and load capacity.

What Is a Subframe?

Most front-wheel drive vehicles will have a subframe. The subframe looks like a little square or rectangle. They are at the front and likely the rear of the vehicle for the suspension. The front subframe will hold the engine and transmission weight to keep the parts from shifting overall.

Subframes are usually in most front-wheel and all-wheel drive vehicles to increase fuel economy, since less weight improves fuel efficiency. They might be made of steel or aluminum.

Jack Up from The Frame

The frame is the safest place to jack the vehicle from since it is the most structurally sound part. A full frame will have a lot of secure jacking points to jack up from.

The subframe on subframe-type vehicles is a good jacking point but not a good place to put jack stands. The subframe will be closer to the center of the vehicle and jack stands should be placed out as far as possible.

Jack Up from or Place Jack Stands Under the Pinch Rail

A pinch rail is a tip that runs along the body. Jacking from the wrong location on the pinch rail can damage the body. Usually right behind the front wheel or right before the rear wheel, markings or reinforced areas indicate the best place to put the jack stands and/or jack up the vehicle.

If Removing a Tire, Loosen the Lug Nuts with the Wheel on the Ground and Place the Tire Under the Side of the Vehicle for Extra Support

Also, loosen the lug nuts with the wheel on the ground before raising and securing the vehicle unless you have air tools.

How to Raise a Car with a Floor Jack

Only raise the vehicle as high as necessary for the repair. The higher a vehicle is raised, the less safe it is to work on.

How to Raise a Car with a Scissor Jack

Raising a car with a scissor jack takes a little more energy. This video explains how.

It’s safest to keep at least two wheels on the ground. If jacking up two wheels, pay attention to the angle of the vehicle as it’s raised. The steeper the angle, the less safe and secure it is for a jack stand to sit, increasing its chances of slipping.

If There Is No Jacking Position in the Center of the Rear, Jack Up from the Side

Some front-wheel drive vehicles will not have a spot in the center of the rear of the vehicle to raise and secure both sides. If that happens, we recommend raising the vehicle from the rear on one side, placing a jack stand underneath, and then doing the same for the other side. For security, have them as level as possible.

How to Put a Car on 4 Jack Stands

Jack Up the Front First

Sometimes it may not be possible to keep two wheels on the ground. If you need to life all four wheels, start with the front wheels by jacking them up and placing jack stands, and then do the same for the rear. Also, make the car or truck as level as possible.

Once Secure, Give the Vehicle a Light Jounce Test

Once you have safely lifted and secured the vehicle, give it a light jounce test. Don’t try to push it off the stands, but test it enough that if it’s slightly bumped, it won’t shift or move.

Jack Up Your Own Vehicle with a How-to Video

If you want to learn where to jack up from on your car, find a how-to video of your make and model in 1A Auto’s how-to video library. We have thousands of how-to videos that cover many diagnostics and repairs for hundreds of models.

Shop Tools and Parts at 1aauto.com 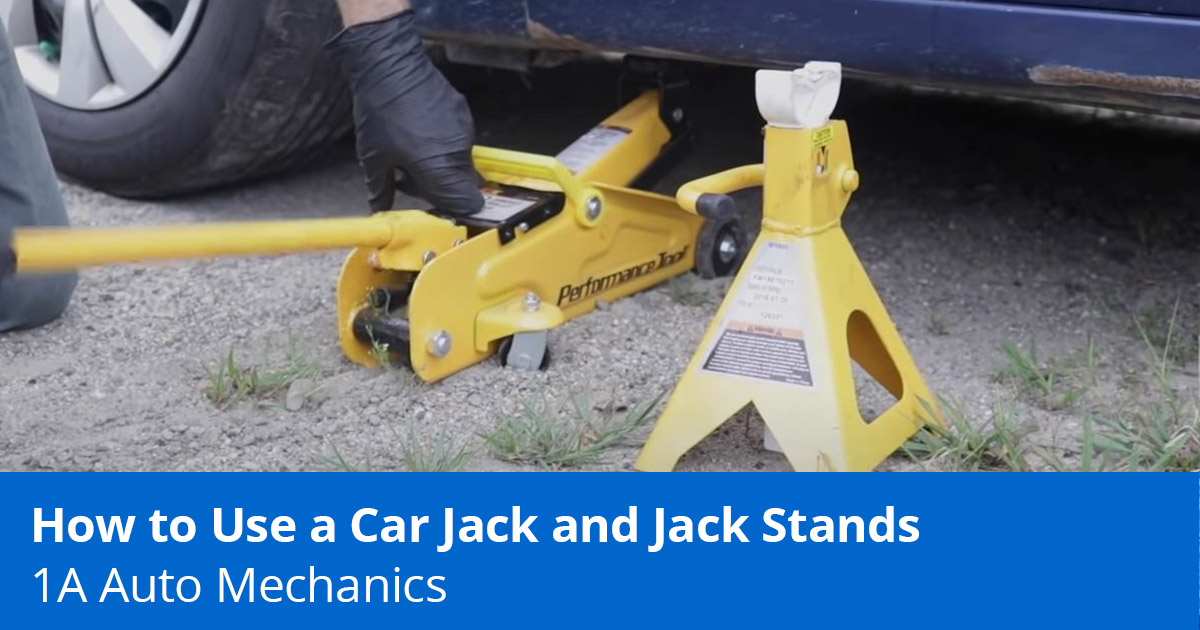