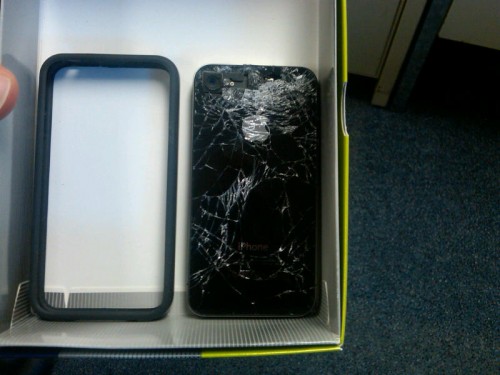 Ok, I have accidentally smashed almost every cell phone that I have ever owned.  I certainly don’t try to, but I’m constantly rolling around under cars, sandblasting, painting, washing, burning, and hammering things.   My environment is just not conducive to cellular phone usage.  Recently my service contract was up, and I had to make a decision.  Do I stay in my simple world without internet on my phone? OR Do I wake up to modern technology and get a phone that has internet, cool apps, and a variety of other gadgets?  I weighed out all the options and questioned some friends on phone durability.  I then jumped into the wide world of modern technology with a new Blackberry Bold. Wow!  Some of my friends tried to convince me to go with the Droid, which does look like an awesome phone, but I decided that it never stood a chance at surviving my automotive lifestyle.  I knew that I could get an Otterbox case for the Blackberry, and one of my friends has put his to the test with a 40 foot drop onto pavement, without damage.  So, mine shooould survive for a while as well.

This brings me to the point of this blog.  What apps does an automotive enthusiast like myself need for their Blackberry?  I know the flashlight is useful, but I don’t even know what else to look for!?  I realize that I could hop on Google and get recommendations from people I don’t know.  I would rather get the info from the absolutely awesome readers of the 1A Auto Blog.

What are the MUST HAVE Automotive apps?

Full disclosure: The Apple I-Phone pictured above was owned by a co-worker and was hit with a poorly (?) guided golf ball from about 50 yards.  The phone was resting “safely” in a golf cart cup holder with a pair of sunglasses keeping it company.  Then it happened, DRIVE! > POW! > SMASH! > CYA!  Just imagine those odds!