END_OF_DOCUMENT_TOKEN_TO_BE_REPLACED

Without question, there is a demand and interest in fuel economy. Buying a hybrid vehicle has a purpose, whether it’s to reduce emissions or just flat out save a few bucks at the pump. However, did you know there was a car made in the early ’90s that outperformed almost all of the hybrids made today?

END_OF_DOCUMENT_TOKEN_TO_BE_REPLACED

We left off the last episode with a freshly fabricated trunk floor, and I had a new tail pan and taillight surround on order.   A few days later, they arrived, and work commenced.  If you are curious, I would imagine that at this point in the story, I must have had about 75 hours into the removal of the quarter, and the repair of the wheel house, filler neck surround, trunk drop off, and trunk floor.  It is easy to see why car restorations add up fast.   The labor factor is huge.  Moving on…

I began this round with the test fitting of the tail pan and the left taillight surround.  They were both perfect, except my trunk floor wasn’t.  Everything needed some TLC with hammers to align it all.  Once I was happy with the tail pan, I drilled a million holes in it and spot welded it all the way down just like when the car was new.  I then coated it in ugly reddish primer because that is what was within reach. 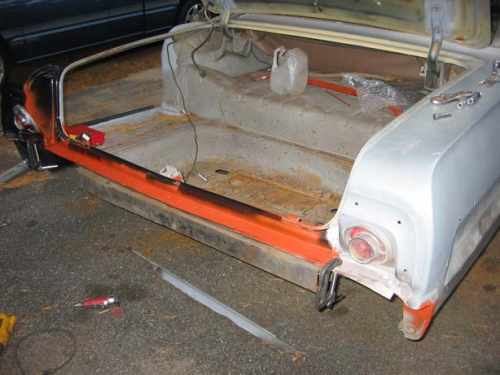 The taillight surround was much more challenging to align than the tail pan was. I used a variety of clamps, and cleco’s.  If you have never used cleco’s you are missing out.  They are cheap little devices that hold metal together like a champ.  Every tool box should have some.

END_OF_DOCUMENT_TOKEN_TO_BE_REPLACED

First off, I love Chevelle’s in a very bad way, especially the front end of a 1970, and the back of a 71-72.  Combining those two aspects together would make the ideal A-Body in my mind.  But anywho, that’s not the topic at hand.  I want to know why the heck GM decided that the SS packages so desperately needed hood pins?  Was there really a chance of a hood flying up?  The Chevelle hood weighs in at just less than 400,000 lbs, do you really think it’s going to fly away?  Maybe the latch just wasn’t able to handle the job alone?  Or maybe it was done strictly for the mean muscle car look?  I don’t know, I’m probably alone here, but I just think the hood pins take away from the clean Chevelle hood lines, and they make it look like a factory installed hack job.  Hey, just my 2 cents.

Somebody please school me.

Oh yeah, here are some pictures of an absolutely mint ’70 SS with a 582 cubic inch engine, pushing out ~750hp, through a 5 speed manual transmission at the 1A Auto car show. MMMMMM,

Last night I had the pleasure of working on a truly amazing 1992 Chevy Lumina. I am forced to describe it this way for two distinct reasons.   The first one being that it was daily driving with two front strut spring mounts that were moments away from catastrophic failure.   I’m not talking about a small scale failure here like when you step on a rake, it’s way more unpredictable than that.  Just imagine stepping on the end of a rake, and when it swings up to whack you in the forehead, you get hit with a lemon maringue pie instead.  Yes, strut failure would be that crazy.  I’m talking about the kind of failure that you read about in text books, and the type that induces Y2K sort of fear.   I mean if these struts had failed, it would have blown out the new tires in grand fashion.  There would have been violent bull-ride steering,  foot-through-the-floor braking, and enough spinning to find yourself being the first one at the scene of the accident.  At that point, the car is totaled because let’s be honest, its a 1992 Lumina.  NADA values it between $362 – $2062.  Ouch.  The second reason that this car was truly amazing is that END_OF_DOCUMENT_TOKEN_TO_BE_REPLACED

This week I wanted to bring up an important topic that we all need to think long and hard about.  Love for Monte Carlos.  Yes,  the Chevy Monte Carlos that were built from 1970-1988 were a beautiful bunch of machines, even the sadly forgotten 1973-77 models.   They all had giant engines, huge fenders, heavy doors, and tons of luxury options.   If you have never driven in one, I would compare it to sitting on a sofa that is strapped down to an erupting volcano.  To celebrate the true wonder that the 1970-88 Monte Carlos are, I have gathered a youtube video of each generation doing an elegant burnout, as only a high class Monte Carlo could.

Between 1970 and 1972 the Monte Carlo shared a large number of parts with the Chevelles, but for some unknown reason (to me), Monte Carlos don’t seem to rot out like the Chevelles and Malibu’s do.  Is it because beauty doesn’t age? Could it be because Monte Carlos are so full of magnificence, that rust cannot possibly break them down?  Maybe it is because they are so uncommon that deterioration itself wants them to last forever?  Whatever magical presence it is protecting these cars from rust, it deserves a high five.  With that, I give you elegant burnout number one!

I always felt bad for the 1973-77 Monte Carlos.  They were always the ugly bunch that nobody seemed to want.  They still had huge engines, and more class than you would know what to do with.  What people don’t seem to realize is that with one of these land yachts sweet rides, you have every single automotive option on earth for an unbelievable low price.  You have buttons that control other buttons, and switches that control knobs.  You have seats that move in like 879 directions, carpet that is 6 inches thick, and enough cigarette lighters to light 40 stogies at once.  The trunk is big enough to sneak 10 of your closest friends into the drive-in, which makes for 18 total passengers.  What is there not to love? As you may have guessed, this body style is the perfect candidate for elegant burnout number two!

The 78-88 Monte Carlos are unmatched in beauty and grace.  If these cars had a decent engine and transmission in them, they could have been the greatest vehicle ever built (……..by Chevy between 1978-88).  The downsides to these cars were the asthmatic V6 and V8 engines that GM loaded into them.  Chevy claimed 165 horsepower, but I assure you that it felt more like donkey power.  Yes, I would rate them at approx. 14 donkeypower.  People in horse drawn carriages would easily pass these cars in a race.  The interiors were slightly less plush than that of the 73-77 body style, but still high class compared to most.   Overall, the great looking body makes up for the lack in power.  You buy one of these cars to look awesome, not to go fast.  If you swap the engine for maximum greatness, you end up with elegant burnout number three!