END_OF_DOCUMENT_TOKEN_TO_BE_REPLACED

Have you ever seen a 1996 Jeep Wrangler?  How about a 2001 Cadillac Escalade?  If you’re about to say yes, hold on and think again.  A number of models through automotive history have skipped model years.

Even though your car may have been manufactured or sold in that year doesn’t mean that’s what year it is.  If that sounds confusing, it’s because model years are confusing.  Though a car might be, for example, a 2015, doesn’t mean it was actually built in 2015.  Car companies want to have the car already at dealerships by the start of the year.  So, in most cases, the new model year is released in the last quarter of the previous calendar year.  A 2015 might be introduced in October 2014, say.

That’s not a hard and fast rule, though.  Automakers can release a new model year as early as January 2 of the previous calendar year.  That is to say, a 2015 car can be sold as early as January 2, 2014.  Sometimes car companies will make a new generation of a car an early release.  In other cases they might extend the sales of one model year into the next calendar year if the new generation is not yet ready.  That is how most skipped model years happened.  Here’s a quick chronological list END_OF_DOCUMENT_TOKEN_TO_BE_REPLACED 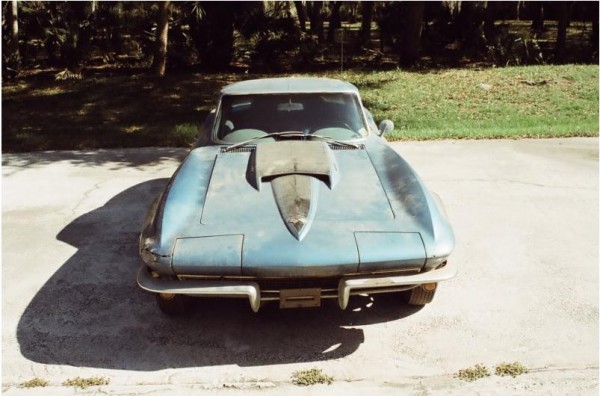 Back in the 1960’s, if you traveled into space, it meant that you were a pretty big deal. It also meant that when you weren’t strapped to the side of a rocket, you were getting sweet deals on Corvettes. Awesome new Vettes. With Big Blocks. And 4-Speeds. Neil Armstrong was doing exactly this back in December of 1966 and Jim Rathman Chevrolet in Melbourne Florida was the reason why.  See, Jim knew that astronauts were going to be in the spotlight, so if he put them in new Corvettes from his dealership, it would be a hell of a win for everybody involved. He was right. Then, when the next model year Corvette came out, the astronauts typically traded their “old” one for a fresh new one.

Fast forward to today, and I notice that Neil Armstrong’s 1967 Corvette was recently on eBay.  It hadn’t seen the street since 1981, and long ago, it had some rough looking fender flares and non-oem wheels attached . Luckily, the big block and the 4 speed transmission are both still there, and that is what really matters. Unfortunately for the bidders, the auction ended without the reserve ever being met. Apparently $250,090 just wasn’t enough to own this piece of American history.  What do you think it’s worth? 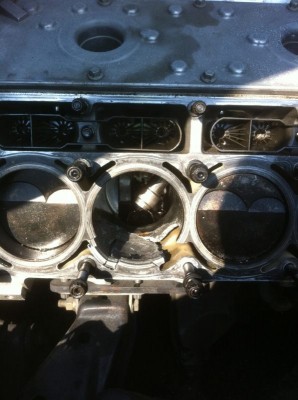 Yesterday, over on LS1Tech.com, “Fastdriver1992” posted up some pictures of his engine… err… what was left of it at least. When it was in one piece, it was a beautiful, all aluminum LS6.  Today it is a pile of aluminum which once resembled a 5.7L Corvette / Cadillac CTS-V engine.  These engines are light, make gobs of horsepower, are fuel injected, and are nice to look at.  Did I mention they make gobs of power?  Oh yes, I believe I did…

Fastdriver1992’s LS6 is typically being used to rocket his 1975 Corvette down the 1320 at 119mph in 11 seconds flat.  It was making roughly 450 horsepower at the top end of the track, around 6000 rpm when all hell broke loose.  After some detective work, the theory is that his engine broke a valve, which danced around the combustion chamber, bent the connecting rod, ate the piston, and exploded the block.  5 seconds later, ouch.

You can see the Full Thread Here. 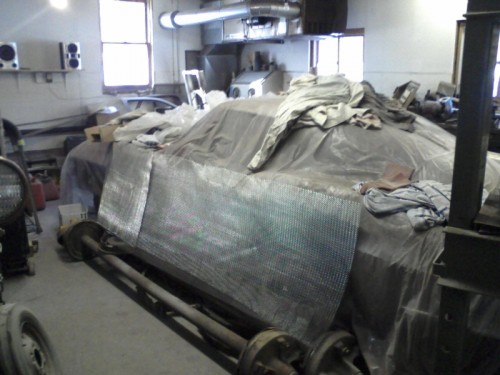 When you are a gearhead, people you meet often tell you about cool cars that they once owned, or once saw.  If you are really lucky, they still own those cool cars, and they want to show them off.  The other day when I was writing that blog about that hidden 1964 Corvette Convertible with the factory fuel injection, I realized that I actually know about a 1963 split window Corvette too!  Much like every cool car though, it comes with a story. END_OF_DOCUMENT_TOKEN_TO_BE_REPLACED

This short story of mine has been many years in the making, and yesterday was a major unexpected turning point. You see, years ago I heard a rumor of a mid year Corvette (1963-67) sitting all apart in a garage.  I was told that this Corvette had entered the garage for a restoration around 1980 and never came back out again. Naturally when you hear about this sort of thing, you imagine that it could be the “holy grail” of car finds, but when reality enters the scene, you find a derelict shell of a 1970’s Yugo. Yeap, been there before.

Up until yesterday, this story consisted of me begging, then me pleading, and then sadness, followed by extended periods of time.  May 10th then arrived and as if by magic, I finally got just a tiny taste of what this car really was.  I opened the first image and stared at it in amazement.  Instead of the 1970’s Yugo shell that always sneaks up on me, I was staring at an absolutely beautiful Silver Blue 1964 Chevy Corvette Convertible with the L84 Fuel Injected 375 horsepower 327 engine.  Inside my head, my brain was screaming “Cannot Compute! System Malfunction! Meltdown Imminent”.  I slapped myself in the face, started breathing again, and welcomed back my surroundings.  The next two pictures were equally mesmerizing.  This was definitely a very, very special car.

Just how rare is this car you ask?  Well, let’s take a look at the production numbers for the minimal facts that we do know.

Now, we know that at the very “worst”, it is 1 of 1,325 built, which is crazy rare as is.  But how many of that total were in convertibles vs. coupes?  I would imagine that we can assume half? (Corvette gurus, feel free to jump in anytime.) Okay, so let’s say that the car is now about 1 of 650 convertibles with the L84 fuel injected 327 produced.  But wait, out of 22,205 Corvettes made in 1964, only about 14% were painted Silver Blue and that was included coupes and convertible. For the sake of fun, let’s just assume that the color was split evenly across both body types. We can then assume the car is about 1 of 300 built based on what we currently know.  Now, how many of those still exist?  Not all of them, that’s for sure.

Great, now where do we go from here? Well, I have been sworn to secrecy and I don’t have any more pictures or information.  My hope is that it will someday be finished because I would absolutely love to hear that this Silver Blue convertible is back on the road again.

*Special thanks to the “Top Secret Informant” for sharing these pictures with us.