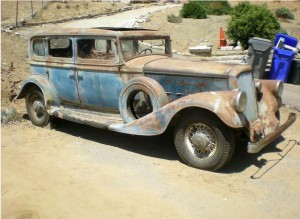 Every so often, I type “Barn find” into eBay Motors just to see what kind of coolness pops up.  The search always yields hundreds of cars, trucks, and motorcycles that I dream of owning.  I want to be the guy that finds these things.  If there is some kind of Indiana Jones sort-of adventure involved that is even better.  I will run from crazy underground traps, and solve ancient riddles if it gets me a sweet old car. Heck, I may even do it for a couple of seized engines.  It’s every gearhead’s dream.

On eBay there are guys that pull ’60’s Vette’s, Yenko’s, Packards, and everything in between out of fields and barns.  How they find this stuff? I have no clue!  One of my favorite eBay finds recently was a 1933 Pierce Arrow.  It was apparently sitting under a tree in California for the last 50 years.  Luckily for car enthusiasts, cars don’t rust into the earth so fast in California, so this is an easy save for any restorer.  Check the pictures out and tell me how mad you are that you didn’t find it first!

Got a barn “find” story with pictures? Tell me your story.  I absolutely love reading about this kind of stuff.   If your story is good I’ll post it up here!

Ebay just recently came out with a new feature that is still quite beta, but looks pretty good. It is called “My Vehicles”, and I feel like it is a big step in the right direction.  It allows users to save specific vehicles to their user name, which is great for people like myself that search for parts for the same car every time.

Since it is a beta version, eBay is trying to get users to test it out for them.  If you fill out a survey, you are entered into a contest where you have a chance to win a free trip to the SEMA show, and then dropped off in the “my vehicles” area.  Good stuff!  You can enter the contest a bunch of times, which of course I did because I like free stuff as much as anybody.  Here is the link to get you there.

If you are feeling super lazy or if you are way too cool to enter a contest, you can go straight to the “my vehicles” area by clicking the next link below. 😉

Check it out and let me know what you think.

I personally think it would be pretty rad if a user could save a picture of their own car up there, and maybe have saved searches as well.  I’m sure cooler stuff is on the way. 1 step at a time!

Like any car enthusiast, I often find myself scouring eBay Motors for cars and trucks that I can’t have.  While doing so, I stumbled onto a fleet of Jaguars that looked noteworthy.  Apparently they were collected between 15-25 years ago, and haven’t really been touched since.  The thing that I find most impressive is that a bunch of them are “racked” up high in a warehouse of some sort. You need to be a truly dedicated & motivated gearhead for those kinds of shenanigans.  I mean how cool would it be to be able to look up at  project cars while you work on others?  Anyway, the starting bid is $200,000, so get out your wallets.

Here is what the auction includes along with misc parts:

And here is the eBay Listing