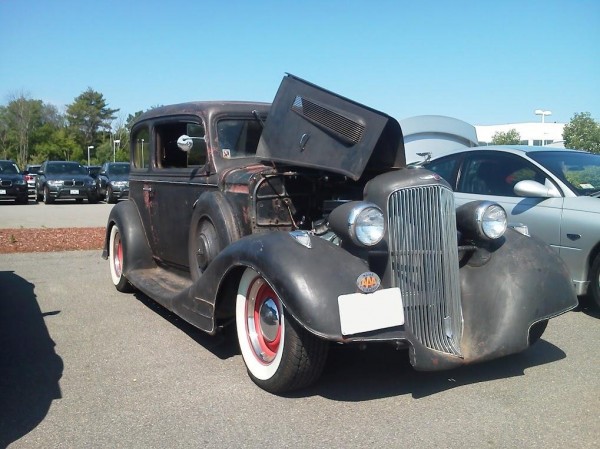 It isn’t every day that you see a 1934 Pontiac 2 door sedan with dual side mounted spares. It also not super common for a stock bodied 1934 Pontiac to have a giant 428 Pontiac motor stuffed under the stock hood. The thing that really impressed me though, was the absolutely pristine, custom-built, perfectly painted chassis that was hiding the coil-over independent rear suspension and inboard disc brakes. Yes, THAT was impressive. In fact, it was so impressive that it needed a plexiglass floor pan to properly show it off. This is totally my kind of car. Under the radar. Low key. Nonchalant. Powerhouse. 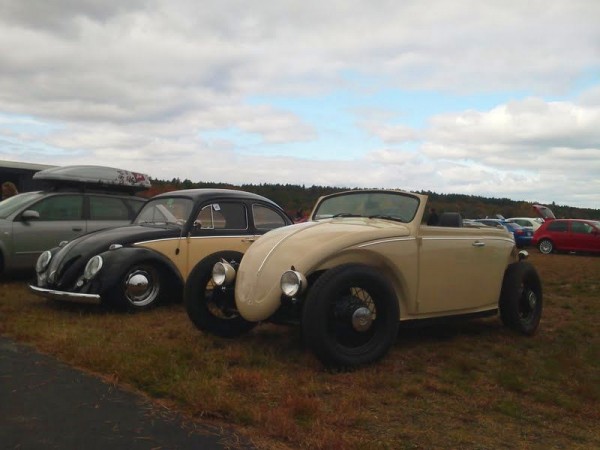 With clouds from the Simpson’s floating high overhead, I snapped a picture of something that I need more of in my life. The “less is more” attitude was incredibly strong with this one. Now if only I knew how to use a camera… 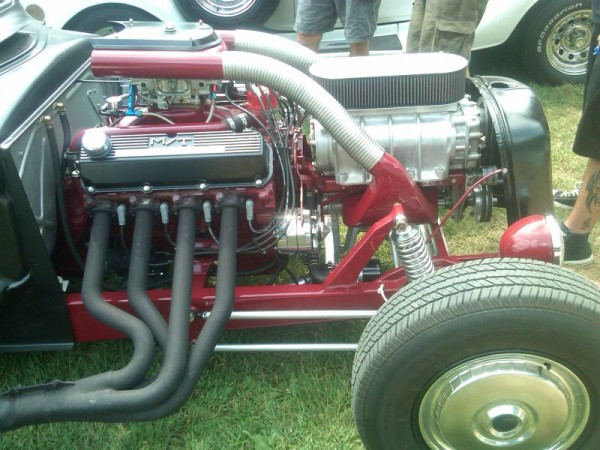 It’s always refreshing to see creativity used to the fullest advantages on a hot rod. This evil looking hotrod pickup is slightly extended in the nose region due to the front mounted roots type blower! WUT!?  Yes, settle down now. While I can’t confirm exactly what goes on within the walls of those silver intake tubes, I have to assume that they aren’t the only thing holding the boost inside.   How does it work you say?  Well… The crankshaft has a …well… shaft coming off the front of it. That shaft passes through some bearings, and has a dual pulley on the front side.  That dual pulley spins the supercharger, which begins moving air.  The air then flows up the duct work to the blow-thru carb, and voila, “Bob’s your uncle.”  Like it, Love it, Lust it.  The choice is yours and yours alone. 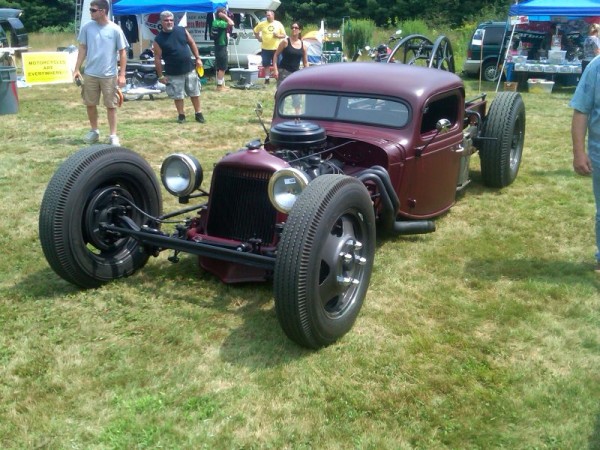 2011 must be the year of the hotrod tow truck or something, because everywhere I go, I find myself surrounded by them.  They must see what I drive and just assume that I need help anytime I stop.  Anywho…  As promised last night, I have more pictures from the ungodly awesome Milltown show.  Tonight’s display of hotness is a hot rod wrecker of epic proportion.  It’s low.  It’s menacing.  It’s basically everything I have ever wanted.  After spending about 15-20 minutes staring at this truck from every angle, I can assure you that it is bigger and badder in person than it is in the photos.  Keep that in mind.

Also worth noting: Notice how all the people in the above picture are staring in different directions.  A strange moment in time no doubt! 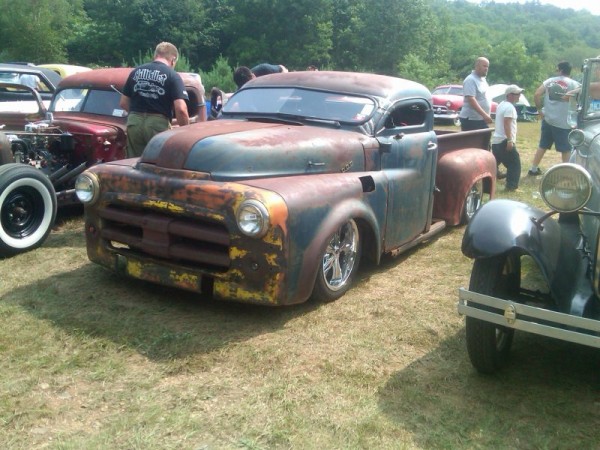 Over the weekend I had the pleasure of hanging out with an absolutely fantastic group of car and motorcycle enthusiasts. It was known as the “Return To The Milltown Hot Rod N’ Kustom Rock N Roll Weekend” in Sturbridge Massachusetts.  If I may be so bold, I’d say it was the most amazingly creative / awesome selection of old rolling metal that I have ever seen in one place.  Not only were the cars great, but the people were too.  Throughout this week, I’m going to be posting up pictures of some automotive eye candy that I spotted while I was there.

To start off the week, I’ll post up one of my favorites. It’s a 1953 Dodge B Series Truck that I had originally spotted (pre-roof chop) over on killbillet.com several months ago.  Back then I was thoroughly impressed at how little money he spent building it.  His truck’s ratio of greatness to dollars spent was completely off the charts.  Sure enough, he had made the trek all the way from New York to the depths of Massachusetts to be part of this amazing event.  Simply fantastic. 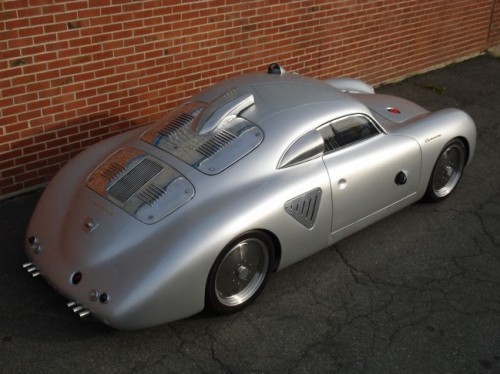 Back in 1992, Jeff Dutton of Australia was building a fantastically hotrodded Porsche 356 ……errr ……914? Whatever it was, it turned out to be one of the cooler looking Porsches that I have laid my eyes upon.  From what I understand, Jeff’s family was in the coach building business since the early 1900’s, and this is where Jeff honed his skills that were needed to build the “Silver Bullett”.

The Silver Bullett actually began its life as two cars that were only vaguely related, like 2nd cousins.  The first being a Porsche 914, and the second being a rough looking 1955 356 continental coupe.  Some purists weren’t too thrilled about the fact that Jeff cut up a rare ’55 356, but who knows, maybe the 356 was 1 step away from turning to dust?   END_OF_DOCUMENT_TOKEN_TO_BE_REPLACED 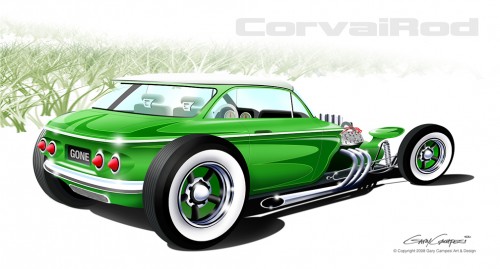 If you have been following the 1A Auto Nutt’s and Bolts blog, you have no doubt seen the pictures of the 60 Pontiac Ventura rot box that is waiting patiently awaiting some love in my garage.  If you are sick of hearing about it, I’m sorry, but it is weighing on my brain, and I need to get my thoughts straightened out.  So yea, I have spent a lot of time recently trying to figure out what the heck I’m going to do with it.  It definitely doesn’t make sense financially to restore it back to original, because you can easily find clean drivable examples for sale for less money than it would be to restore this (and that doesn’t include my 1000+ hours of my “free” labor.)  That fact has definitely been established.

So my latest wild and crazy idea is to turn it into a 1930’s style hot rod. (Disclosure: Yes, I was somewhat inspired from Gary Campesi’s paintings from the other day.)  Anyway, I would do this by cutting it up and shrinking the body into a 2 seater, almost like a T-bucket but with all the sexy 1960’s body lines.  Then I would drop it on a home made chassis and suspension. I’d probably power it with something more modern like a 4G64, L92, 2JZ, or maybe a KA24DET. No matter which I choose, it would be backed by a manual transmission, because that’s how I roll.  Wrap some giant brakes and big wheels around the whole thing, and I feel like it could be pretty slick.  Other than the injected engine, I would keep everything super simple, no crazy options.  Just simplistic beauty.

Unfortunately I couldn’t find anything similar on the internet (imagine that?), but these four pictures are the closest to the idea itself.  Obviously none are 1960 Pontiac’s, but…. well…. you get the idea…

So what do you think? Stupid? Awesome? or just plain “no”?