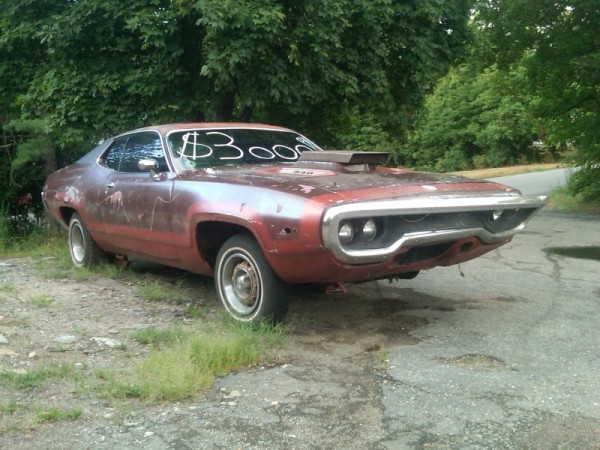 The other day I spotted this 1972 Roadrunner for sale, and today I had the opportunity to examine it up close.  What I encountered was a 2 minute emotional rollercoaster.  From 100 feet away, this car screamed “Buy me! I’m everything you’ve ever wanted“.  From 10 feet away it snickered “LoL, April Fooollzz“. Then when I peeked into the interior, my brain was thrown into a dense fog.  END_OF_DOCUMENT_TOKEN_TO_BE_REPLACED

In the beginning of the 1970’s muscle cars were it. The more cubic inches you had, the more you could brag.  Then the big bad catalytic converter jumped into the car scene, and ruined everybody’s fun. Way to go smog. By the time the late 1970’s came around, the best you could hope for in a new car was a manual transmission, some groovy disco stripes, and t-tops to let your hair breath.  In short, you hoped for this Road Runner.

Flat out, I have no idea what year this Road Runner is, but I’m quite sure its between 1976-80.  The front bumper is throwing me off because it has the parking lights in it.  I’m not sure if that was a specific year thing or a Road Runner thing.  No matter what year it is, this car is the bees knees.  Just look at it for god sakes!  360 V8, manual transmission, t-tops, side pipes, chrome Cragars, window vents, a hood scoop, and those frickin stripes!  Oh god, I gotta have those stripes!  If cool options were land mass, this Road Runner would be the Louisiana Purchase.  I’m serious.  I would put a comb in my back pocket, bury my foot into the cutpile carpet, and rock this thing hard.  Would chicks dig it you ask?  Who knows!?  Who cares!?  Just look at those stripes!

Yesterday on Jalopnik, they had a story about Hollywood’s Hidden Parking Lot.  It was really a pretty cool read, and it got me thinking back to when I was about 13 years old.  I remember taking a family trip to Florida, and going on the “Universal Studios Backlot Tour”.   (It is a very vague memory so bare with me.)  I think I was on a trolley sort of thing, and I remember driving by a big parking lot that had a bunch of old movie cars in it.  The only part of the tour that I actually remember was the row of faded & damaged blue 1939 Plymouth coupe’s that were from the Roger Rabbit movie.  With a quick search of Google, I actually found an old picture of them.  Gosh I would love to have one of them.  Even the one with the missing roof!  Like most cars from 39-41, they just have great lines.

My question to you is:  Does anybody know if these cars are still there?  Got pictures? What else is there with them?  Bonus Points if you can find them on Google Earth! (I tried and failed.)

Photo by Jeff Lange, Found on:

It’s simple math really.   You take one totally awesome California raised Plymouth GTX, subtract all cares about what other people think, and end up with a bold custom license plate.   Oddly enough, this car was spotted last night at a Massachusetts cruise night.  Let’s throw some more math into the post for fun’s sake.

Miss Belvedere was the talk of the town in June of 2007 after being unearthed from the deepest darkest depths of downtown Tulsa.  She was a brand new 1957 Plymouth with just 4 miles on her when they dunked her in the pit of no return.  Fifty years later when the light of day finally shined on her again in 2007, she had not aged well.  She looked like an automotive version of the Cryptkeeper (Remember that show – Tales from the crypt!??).  Anyway, as it turns out, automobiles cannot be preserved by dunking them under water for 50 years. Wait….WHAT!? Yes it is true, dirty gutter water from the Tulsa streets does not preserve sheetmetal, fabric, or plastic.

Shortly after she was raised from the sarcophagus, she was put on display for all the interwebzz and journalists to get their piece.   END_OF_DOCUMENT_TOKEN_TO_BE_REPLACED

Growing up, while my middle school classmates were yapping about the newest R.L. Stine books, I was deciphering the differences of a 1933 Plymouth PC vs. PD vs. PDXX.  I was not normal, and never got into the “normal kid” books.  Instead, I swooned over low production numbers throughout the pages of the “Standard Catalog of American Cars 1805-1942”.   The classic designs, unmatched style, and the rawness of old cars was the only interesting thing that I could find in books.  Needless to say, many years have passed and I still never read any “normal” books, but I have managed to acquire quite an automotive library.  Old books, new books, automotive design books, tuning books, service manuals, and enough car magazines to fill the Grand Canyon twice.   With all of that, I bequeath to you “Jeremy’s official list of must-have book’s for your Gearhead hangout.” (Notice I capitalized “Gearhead” this time because I feel it is something to be proud of, and deserves that big first letter.)

In no particular order:

2) “The Hemi in the Barn” by Tom Cotter (This book is amazing, you must read it.)

3) “The Cobra in the Barn” by Tom Cotter (This book is equally amazing, you also must read it.)

4) “Classic Customs and Lead Sleds” by Bo Bertilsson (Filled with the most beautiful lead sleds you will ever see.)

5) “Maximum Boost” by Corky Bell (This will change your life.  If you like forced induction, eternal happiness will be found within.)

6) “Street Rodder’s Chassis & Suspension Handbook” (Someday I will build one, and you will too.  This might prevent us from screwing up.)

What are your favorites?

Sometimes you look back in life and realize that you let some awesome cars slip right through your hands.  This is a story about one of those cars, and I think about it all too often.  It began about 15 years ago when my parents bought a “drivable” 1933 Plymouth PC 4 Door Sedan.  Unknown to my parents at the time of purchase, this was an extremely rare car.

Back in 1933, cars didn’t have fancy model names like “Zephyr” or “El Camino”, they just had model numbers.  Boring, I know.   Even with its brand new fancy-pants one-year-only straight 6 engine, it didn’t have a chance of survival.  The great depression was hurting the country worse than ever, and Plymouth had decided to remake the 1932 bodies (for all intents and purposes) and call it a 1933 PC model.  Much to Plymouth’s surprise, the few customers that they still had were less than impressed with this grand idea.  The Plymouth PC was built for a mere 3 months before they ended production early and switched to the longer wheelbase PCXX and PD models.  That’s right, the customers hated the PC and wanted something different, so Plymouth gave them a longer vehicle.  At least it wasn’t a 1932 model anymore, right? Several years later, WWII began, and cars were being crushed and melted left and right to make war vehicles.  Naturally, the cheapest, crappiest cars out there were the first ones on the chopping block.  (Almost sounds like the Cash For Clunkers program!)  For reasons unknown, my parents Plymouth had survived all these years against all of these unimaginable odds.

Ok, enough of the history lesson,  let’s get back to when the vehicle arrived in the driveway, shall we?  My dad is the best technician I have ever met by leaps and bounds, and he was doing a little nitpicking of the new 4 wheeled acquisition.  A grind here, and hammer there, and pretty soon a frame-off restoration was in full swing.  In his defense, the “drivable” car was built of 80% body filler, 13% rivets, and 7% original sheet metal. The lack of solid body was bad enough that it had to be redone by somebody with more time, the right tools, and more work space.  So off it went to a body guy.  Weeks passed and a fair amount of money exchanged hands.  Frequent phone calls from the body guy assured my parents that everything was going great.  New metal was going on, and it was going to be straight as an arrow when they got it back. Yippy!

A month had passed since we last saw the car, and out of the blue my dad received a phone call from the a storage unit owner looking for rent money.  “What the?”  Well, the body guy had put the Plymouth body and misc parts into a rented storage unit, and took off with the cash.  Nice guy right?  He had never even touched the car, which was truly crushing.

Weeks turned into months, and months turned to years.  The sour taste for this once loved vehicle never left their mouths, which understandably left this ultra rare pile of auto parts sitting dormant in the yard for many years.

At about 18 years old, I just couldn’t take it anymore.  I decided I would take charge of the project and teach myself how to do nice bodywork because I couldn’t stand to see it rot.  Hundreds upon hundreds of hours went into that car.  Cutting rot, welding 300+ rivet holes in the roof, fitting the suicide doors, assembling, building a new firewall, removing the doors again, reassembling….. and on and on it went.  Within a summer, it was finally running again.  It was far from drivable, but it did run.

Then, the big move happened.  The house was sold and all the rolling stock had to move from the old house to the new.  “Temporarily” the car went to my brothers house.  Temporary then turned into permanently, and before long, the car was parted out and sold piece by piece.  Yes, it was all gone as quick as that, and I am still sickened from it.  Unfortunately, I lacked time to finish it, and space to work on it.  I already had too many cars and had to make choices.  Looking back I would have done things a lot differently, it’s too bad I can’t get it back because I would have loved to finish it.  Hopefully this Plymouth’s parts have helped bring others back to life again. That is what I tell myself at least.

If you happen to know the whereabouts of any of the major parts from this car, I would love to hear from you and see your own Plymouth project!

What kinds of cars you have you let slip away? Leave me comments!