The fender needs to be buffed out, and the brakes need work, but solid overall.

When I was in middle school, probably around 16 years ago, a Jaguar XJS showed up in a parking lot near my friend’s house. It made a lasting impression on me because at the time, it was an absolutely beautiful car with exceptionally rich black paint, a low roof line, sleek body contours, and I’m quite confident that it had a V12 emblem on the back. It proudly announced its luxury and prominent heritage to any car that parked next to it. “Hey Chevy Cavalier, look at me, I’m a fancy Jaaaaguar… Did I mention I have a V12?…. meowww…..” There was something very odd about this car though – it never, ever, ever, moved! It sat in the middle of this big newly paved parking lot, waiting for somebody to drive it home. First it was waiting for weeks, then months….then years….and now decades?  The only time that I saw it move was when it landed in the dirt corner of the parking lot. At the time, I remember thinking “that car looks like it was dragged there with force -ouch!” Was it abandoned? Was it just being stored there until the restoration could begin?  For 17 years? Who knows. The only confirmed fact that we have to work with, is that each winter it becomes the bottom of a very, very large snow pile. END_OF_DOCUMENT_TOKEN_TO_BE_REPLACED 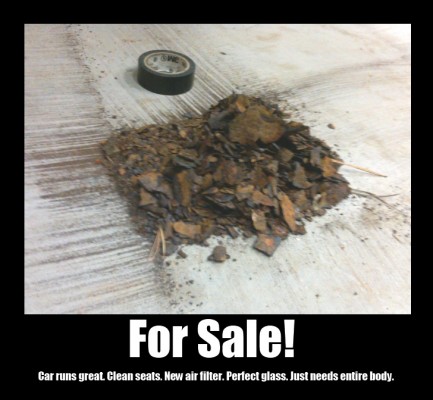 In the northeastern part of the country, we live under a blanket of snow from December to March.  During this time, the roads are covered in 3 equal portions of snow, sand, and salt.  While the sand and salt mixture does in fact do amazing things when it comes to road conditions, it also removes the structure from your vehicle.  Not cool salt, not cool.

Many people ignore it until the guy at the inspection station says “I had to fail you for safety because your control arms aren’t there anymore, and neither are your rocker panels, floor pans, and rear quarter panels.”. You then look at your fresh new red “R” on your windshield and wonder where all the metal went. END_OF_DOCUMENT_TOKEN_TO_BE_REPLACED

Over the course of 2010, we had some pretty funny, interesting, educational, and inspirational blogs on here. Today, I’m posting up my favorite 17 blogs. Yeap. Seventeen. Anyway…. Which were your fav’s?

Junkyards are the final resting place of failed invention.  For those of you that frequent junkyards, I certainly do not need to tell you about the types of brilliance that can be found behind their prison-like chain link fences.  See, junkyards aren’t just about crashed cars; their awesomeness is far deeper than that.  Obviously there are a plethora of cars that are so horrifically crashed that they instill the fear of driving into you that you will never forget.  Then you see rows of burned-out motorhomes.  In tough economic times, as if by magic, those rows seem to grow.  Coincidence?  Hmmmm.  Around the outskirts of most junkyards is where you typically find the really old stuff.  Everything from old cars and trucks to farm equipment and machinery.  But we aren’t talking about any of that today.  We are talking about inventions.

These inspirational inventions in junkyards are almost always unfinished projects that were likely fueled by acetylene, oxygen, a bit of argon, and most of all, alcohol.  We all know that if you take two great things, and put them together, you obviously multiple the greatness and get something twice as nice.  Right?  Well, junkyards prove this because the merging of great things just so happens to be the most common invention found. Take this “Willy’s-Jeep-Nissan-Plow-Tow-Offroad-Truck” from the 80’s for example.  It features an 86 Nissan D720 up top, and what I believe is a vastly shorter Willy’s Jeep chassis and suspension below.  It’s a win from every angle.

Now, you are probably asking: What about the projects with less than 4 wheels though?  Do those end up here too? Ofcourse they do!  The junkyards don’t discriminate when it comes to great inventions.  Here we have this “Lawnmower-Scooter-Moped-Trike” for a 3 wheeled example.  I have always thought that my lawnmower had too many wheels.  Sadly, the previous owner of this super mower trike didn’t put it into production so that we all could reap the huge benefits of the rotational weight savings.

Oddly enough while at a swap meet over the weekend I spotted an invention that is strangely similar, yet equally genius.  Naturally there were a lot of comments like “Geeze, my (husband, wife, mother, son, grandmother, etc) could really use this thing!”  So was it purchased?   You’re darn right it was!  Sadly, I don’t know the purchase price.  We can only imagine that an invention of that caliber must go for top dollar.  Will it be a failed invention found in the junkyard someday? Who knows.

For those of you that don’t find yourselves loafing through the ever glistening, questionably non-freezing mud of your local salvage yards, I would like recommend letting down your hair and taking a stroll through.  It is a bizarre world out there, and the salvage yards are hiding the physical proof of it.  After all, it is the resting place of failed invention.

Random Picture Of The Day

Have you ever taken your car to the beach, and then forgot about it …… like …… forever?  It’s ok, that’ll buff right out.  Photoshop or not, I think it’s a cool picture.

In the early 1900’s automotive engineers were trying some crazy stuff.  That is one of the reasons that I love older cars so much.  These guys didn’t really have a “norm” to start with, so they attempted to create it.  Cars in general were in their infancy and each manufacturer was completely different than the next.

The other day I spotted an engine that still had an old clutch assembly attached.  It was something that I had never seen before so I snapped off a few quick pics.  Judging by the planetary gears on the back of the clutch, it was probably from a tractor or some piece of farm equipment, but it was cool looking & genius design nonetheless.   It vaguely resembled a modern puck clutch with it’s multi-pad design.  From what I am told, you could swap those friction pads out without pulling the transmission.  Now that is a good idea!  Just imagine how much cheaper clutch jobs would be if the transmission didn’t need to come out.  Even if clutches didn’t last as long, it could be a 30K mile service that is 1 hour of labor, and likely ~ $50 in friction material.  What am I missing here?  Why was this design lost in history?  Why doesn’t somebody reinvent this for ultimate profit?  What the heck?