The Nationwide series kicks off the weekend tonight at Richmond International Raceway. Travis Pastrana is set to hop back in the saddle once again to make his Nationwide debut, after is was postponed due to an X Games accident at the Los Angeles Arena last year while doing a trick on his dirt bike.

His ankle was shattered into about 20 pieces during that accident, so it wasn’t your typical break. It has taken Pastrana about 9 months to recover from his injuries and countless hours of rehab.

Travis said that he has been spending a ton of time in the iRacing Machine track simulator, to try to prepare for the Virginia 529 College Savings 250 that will run tonight at RIR.

Pastrana also went on to say that he’s a little more prepared now then he would have been last year, and that he didn’t fully understand the language that the drivers use to describe set-ups and how the car may be handling. During his time off he watched more of the sport to educate himself on what the drivers were talking about when describing different scenarios and situations.

Another thing that they had to fix was, when Travis sat in the cock pit of his race car they had to relocate the gas pedal in relation to his repaired ankle so that he could get on and off of the throttle easier while out on the race track.

He said that he would he happy to finish his first race and to stay out of trouble by not hitting the wall or a fellow competitor.

Travis Pastrana is a man of many things, he’s more of a modern-day daredevil if you will. Mr. Pastrana has been very successful in a variety of goals that he has set out to achieve in life.

You may have seen him jump out of a plane without a parachute (yes you’ve read that right), only to obtain one from a friend in mid-air while plummeting towards the earth, or was it when he smashed the 12-year-old Mt. Washington  Auto Road Record by 20 seconds!

Hmmm… Well There’s this Pastrana guy in the X Games that has won 16 medals (11 of which are gold), yes this is the same Travis Pastrana. The guy is simply amazing at pretty much anything he sets his mind to.

Travis has stated that he would love to become involved in Nascar. He has run three Nascar K&N series races in an effort to prepare for his driving debut in the Nationwide series this week at Indianapolis Motor Speedway. Travis has struggled a bit in the K&N series. With a 6Th, 22ND and 25Th place finish, he realizes there’s quite a bit to learn behind the wheel of a stock car.

Travis Pastrana has signed a three-year agreement with Michael Waltrip, forming Pastrana-Waltrip Racing.  Pastrana said that he realizes that there is alot to learn, and that he doesn’t expect to have instant success right away in the Nationwide Series. Most of his success in racing has come from non asphalt forms of racing, but he wanted to try his hand in Nascar to see what happens.

Michael Waltrip also said that he was excited to work with Pastrana, and that it’s going to take a little while for him to learn how to drive a cup car and communicate with a crew chief, but seemed very excited about the partnership. 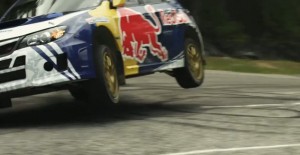 In the interest of awesome videos, I feel obligated to post up this one up for the dedicated 1A Auto Blog readers as well.  It is a video of Travis Pastrana (Awesome rally car driver) planning for, and then racing up Mount Washington.  It will likely be the best 5 minutes of your day, so you will want to sit down and watch it immediately….maybe even twice.  FWIW, much like the Pikes Peak hill climb, these people are crazy for racing this close to a multiple thousand foot cliff.  Just sayin…..

Can’t see the video? Here is the Link: http://www.youtube.com/watch?v=IdXJYc4CpXA