The other day, we shared with you the amazing video of Jean Claude Van Damme performing an epic split between two Volvo Trucks driving in reverse. Well, if you didn’t think that was wild, we have another amazing video that has also gone viral in the past few days. We feel obligated to share it since, well, it’s just plain awesome to watch.

In the video, TORC Series racer Adrian “The Wildman” Cenni is driving a bright orange, modified four wheel drive truck. The truck speeds up the ramp that is positioned on the dirt track, hitting its target and then flying through the air, then does a barrel roll before landing on the ground upright and in one piece. A barrel roll is usually reserved for planes (or James Bond flicks), as shown below, not trucks. 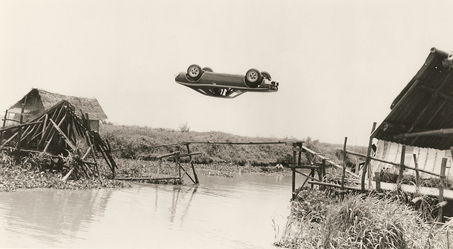 The stunt, which was performed at the 2013 Tecate Score Baja 1000 in Mexico last Friday, apparently was the world’s first barrel roll in a truck. Check it out below, pretty amazing stuff. Oh, and don’t try this at home.