Once you get past the whole “I completely horrified my engine” thing, catastrophic engine damage is really awesome to see.  Here is the Nutts & Bolts Top 3 Most Awesome Ways to Destroy your Engine:

Typically when your internal engine parts forcefully become external, they do so for good reason. You likely built the engine wrong, over revved it, or had a complete lack of lubrication. What you may not realize, is that this seemingly negative action is a really just your car’s way of telling you it wants a more powerful engine.

2) Destroying your valves in epic fashion

Whether it is losing your timing belt at highway speeds with an interference engine, or running lean enough to turn steel into magma, it sure is fun to see.  The grossest display of shared combustion chamber space that I’ve seen was a Cadillac Catera that I worked on many years ago.  It had broken the heads off the valves, bounced them around the cylinders, and then pushed them right back through the exhaust ports.  The inside of the engine looked as if it were trying to combust rocks instead of gasoline.  It was an epic win for shared space that day. Let’s not forget burned valves though, you get an extra points when the valves burn and destroy your turbo in the same instant.

3) Recipe for disaster: The automotive cocktail of destruction

Fix Your Own Car 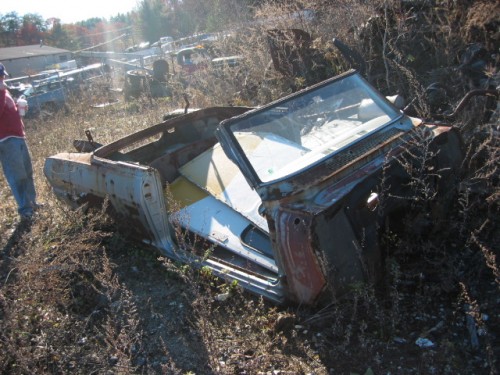 While cruising the junkyards a few years ago, I came across a Chevy Nova Convertible that was 98% parted out and left for dead.  This made me sad because:

A) I get emotionally attatched to cars in junkyards

That seems like a lot at first glance, but they made over 300,000 Nova 4 door sedans in the same time frame, in addition to thousands more 2 door sedans and hardtop models.   The unfortunate reality, is that this car has most likely long been crushed, which is really too bad because the body itself didn’t look all that bad.  Here in New England, we rebuild far worse.

I have spent quite a bit of time working on a chameleon painted Karmann Ghia, and I liked it.  There, I said it.  No, the car doesn’t have a V8, and it doesn’t have a clutch pedal for its manual transmission. However, it does have windshield squirters that are activated by the air pressure in the spare tire (seriously).

When this flamboyant automobile entered my family, I was a bit confused because I was used to the big American muscle cars, and modern sports cars.  This Volkswagen was just a wee-bit different.  It was not only the antithesis of all the vehicles I was used to, but it came with free pass into a bizarre automotive culture.  I would put the VW culture in the same genre as minitruckers, but just a touch more viral.  The Volkswagen crowd will convert you to one of their own before you even realize it happened.  One thing then leads to another and pretty soon you are replacing your oil pan and pulling a 23 window VW Bus out of a river.

What I am getting at here is that old VW’s are something that you need to mess around with at some point in life.  By no means am I saying that they are “the greatest car evah!”, or the only thing that can possibly save us from 2012.  What I am saying is that they are put together in a way like none other of their era, and aside from the windshield squirters and the missing pedals, I kind of like them.  Working on one of these foreign oddballs really opens a whole new thought process on how to put a car together.

There has been talk about Cadillac CTS Coupes for quite some time now, and also chatter about just how spectacular the CTS-V Coupe will be when it eventually arrives.  Well, the time is now upon us.  Cadillac is saying that the the CTS-V Coupe is really available for the 2011 year, and from the looks of the pictures, it is as beautiful as ever.  Lucky for us, it still has the magnificent work of art under the hood, and it is just as beautifully supercharged and powerful as ever.  The magnetic ride control, 14.7 inch rotors, and 6 piston Brembos matched with 19 inch wheels wrapped in Michelins, is truly the exact package that every vehicle needs.   This car appears to be what happens when the GM engineers get together and say, “Let’s just put the best of everything we have on a car and see what happens”.  If Cadillac wants to donate one of these to a good home for some real world testing, I will be willing to donate my time, gas, and opinions to their cause.  🙂

The other day, while installing some auto parts, it dawned on us that we could be sharing the thrill and excitement of installing car parts with the entire world!  Naturally, we considered using supermodels for these how-to videos, but after careful consideration, we decided that you would rather see us instead.  Your Welcome!   We may not be in bikinis (thank goodness), and we may drop a headlight from time to time (2.55 minutes in), but this is real life and things happen .  Take a look and let us know what you think.

This specific video is how to install a new headlight on a Chrysler Voyager, which in reality is the same as the Dodge Caravan and Chrysler Town and Country.

At 1AAuto we are always helping our customers in every way we can.  One of the things that we are trying out is installation videos for a variety of our parts.  It is really us, installing our own 1AAuto parts for our friends, family, and many of our own cars.  Let us know what you think.