Last week we discussed the Top 3 Most Awesome Ways To Destroy Your Engine.  This week, a video popped up in front of me that documented a very special event.  It was as if the video was saying “Hey Jeremy, I was just reading your totally radical automotive blog and I would like to share a video example of something on your Top 3 list”.  Well, thank you Mr.Awesome Video, I accept your greetings and your offer.  The only thing missing in the video is the super high speed camera slow-motion replay button.

We drive on the open roads each day never giving a whole lot of thought about them.   Do you ever begin to wonder what happens when a road becomes less traveled?  How about when it’s blocked off and forgotten about?  Have you ever seen one built but never actually opened to traffic?  How about when the land reclaims the asphalt by force?  You may not realize it, but pictures of abandoned roads are an absolute win on many levels.  Is it lame to say that these roads have reached the end of the road? You decide.

All of these great photos from a www.Motivemag.com discussion forum.

As an avid car enthusiast, I find myself frequently drooling over customized vehicles that I find on the internet.  I’m not picky, if it has wheels and an engine, I’m probably drooling over it.  This is one that I originally came across on a truck forum, and saved the pictures because I think it is intriguingly awesome.

It was built by a guy in New Zealand and it is was a Mitsubishi L200, which are known as Mitsubishi Mightymax’s in the United States.   He chopped the roof, bobbed the bed, body-dropped it, and added some much needed air ride suspension.  Overall, very cool.  This is obviously a work in progress, but from what I remember, it was getting a turbocharged 4G63 engine from a Galant VR4 shortly after these pictures were taken.  These are from a year or two ago, does anybody out there have updates? I sure can’t find any.

While cruising through the sand pits near the internet’s automotive superhighway, I came across something way more rad than your new patch-covered jean jacket.  It’s quite odd, has 4 wheels,  and comes complete with an engine, thus heavily qualifying it as an automotive oddity this week.   Let’s stop for a moment and consider all the things in life that you have ever thought about running over.  Watermelons, crush em. Dirt piles, crushed.  Couches, crush. A wagon full of teddy bears, crushed. A pool full of pudding, crush.  They are ALL now able to be crushed thanks to the guys in this video.  With 7 feet of articulation, it doesn’t matter what’s in front of you, it’s getting crushed. 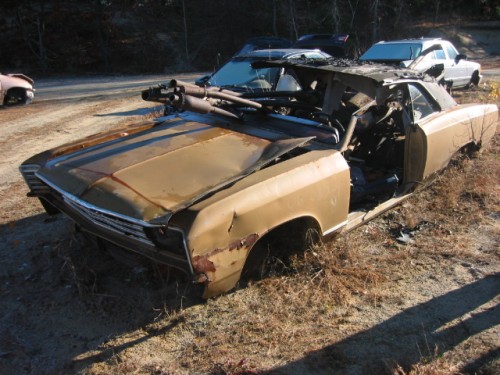 While on one of my weekend junkyard journeys, I came across possibly the saddest looking 1967 Chevy Chevelle in the history of mankind.  It was in tough shape as you can tell, and basic in every possible aspect of the word.  It had some of a small block still hiding under the hood, and a terribly boring automatic transmission to match its painfully bland paint.  I have to assume that this car put the previous owner to sleep every time they looked at it, which ultimately drove the most boring Chevelle ever to its final resting place.

Got pics of rotting cars?  I want to see them!  Send them to jnutt@1aauto.com

You may not think anything could be more thrilling than the “Pants on the Ground” singing sensation General Larry Platt from American Idol last night, but there is in fact something far greater.  A simple internet link from a friend yesterday took me to some fresh pictures of an absolutely unreal Pontiac Solstice built by Stenod Performance.  One quick peek, and I was desperately clawing at my mouse craving more.  I mean who doesn’t need one of these? It could be the most perfect daily driver for any gearhead out there.  An LS7 with 625 horsepower and a dry sump setup, 6-piston Brembos, and coilover’s for that absolutely perfect stance.  Wrap all that up with a new tiny convertible Pontiac Solstice body, and you have an ultimate win.  It doesn’t even scream “arrest me”, so staying under the radar is even doable.  Stenod definitely built this car just right in my opinion.  I have to guess that when this car is in motion, the driver is laughing hysterically at how absolutely absurd it is. Well done.

I will shut up now, enjoy the eye candy, I know I did.