Around 5 years ago, we had a very “early” edition of the 1A Auto Blog.  It wasn’t nearly as fancy as the work of art that you are reading today (wink-wink), but it did have some really great content on it. Unfortunately during the update from the old “Nutts and Bolts Car Blog” to the amazingly awesome “1A Auto Blog”, some content didn’t quite make it all the way over. Luckily, I saved it all! Over time, I have posted a few things from these archives, but today I am sharing quite possibly my favorite post that has ever been on the 1A Auto Blog. It isn’t just a post though. It is a 4 part story written by Janice Green, about a very special 1966 Pontiac GTO. So, I will roll out 1 part per day for the next 4 days.  You’ll want to grab a coffee and a comfy chair for this one, it’s quite an incredible true story. 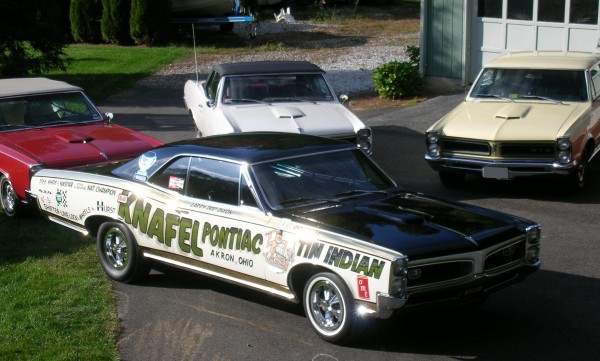 Other than our red ’66 GTO convertible –Oh yes, we still have it. It went on our honeymoon with us and has been part of the family ever since– there is one car that has been part of our lives for over twenty years, perhaps really, in a cosmic sense, even longer, because my husband Merle actually knew more about its past than he realized when he found it. My husband is a retired United States Air Force pilot. He has, therefore, cruised the straightest highways in the world in what was then the largest, even if not the fastest, airplane on the planet. In 1979 we were stationed at Dover, Air Force Base, Delaware; additionally, we owned our very first garage where one project or another was always in progress.

Not that I was always thrilled about those projects, but my husband exhibited such confidence in himself and in their necessity that he always persuaded me. Of course he was younger then too. His thick, honey colored hair had not transformed to salt and pepper; his stomach was flat; and there was the uniform. That was the killer. He still stood an impressive 6’ almost 2” in it despite a bone shattering altercation with a gym floor, during a lunchtime pick-up basketball game a few years earlier, that had necessitated his wearing a 1/4” lift in his left shoe. The uniform and a smile could weaken a woman, even a wife, and so I acquiesced, allowing the rugged, clean cut look to sway me, always forgetting until laundry time how the greasy, ground in dirty jeans never quite elicited the same willing reaction.

Anyway, the cockpit of the C-5A afforded Merle a spectacular view of the Delaware countryside, and he routinely scanned for more than runway markers. A panoramic view apparently only makes junkyard jewels and abandoned automotive treasure sparkle more brightly. Inevitably the day came when I knew that high altitude had eroded his sanity. He had eagle-eyed one too many fields. Into our driveway limped a wounded warrior, one of the tackiest 1966 Pontiac GTO hardtops I had ever seen. I seriously feared the ghost of the mighty and revered Ottawa war chief Pontiac would invoke the wrath of The Great Spirit upon us for offending his name — never mind what the neighbors would say, or kindly not say, when this heap continued to grace our tidy little middleclass neighborhood. Not only did the car’s body, roughly garbed in faded red metallic, scream for paint, but also there were other omissions immediately obvious. What woman in her right mind could have been impressed with this thirteen- year-old car cloaked in multiple layers of paint and primer, further enhanced by no coat hooks, no sound deadener, no radio, and no heater?

At the risk of annoying all of Academia, I have to pause here to mix my metaphors, something I really rather enjoy doing at times when more than one comparison is valid because there is more than one perspective. When I first saw this old car, the imagery that dominated my mind was largely influenced by its brand name. Had I been a bit more suspicious of it at the time and, instead of seeing it as a wounded warrior, been able to both see its potential and, even better, been able to see it in female terms (an activity I am usually opposed to where cars are concerned), I, even as accepting as I had already become, might have been a bit jealous of it. But I doubt it. I, after all, was only in my early thirties. This was at best a withered hag. How was a wife to know that this, the newest in the long parade of high performance has beens through our yard, was once the beauty Abishag? Even absent pail and rag, which it clearly needed, it was putting on a great act. I never once considered the likelihood that this old wreck had fallen from and might yet return to something great and good. Merle knew though. Call it sixth sense, or call it siren song, whichever you choose. It lured him. He knew.”