This is a continuation from yesterday’s Part 1 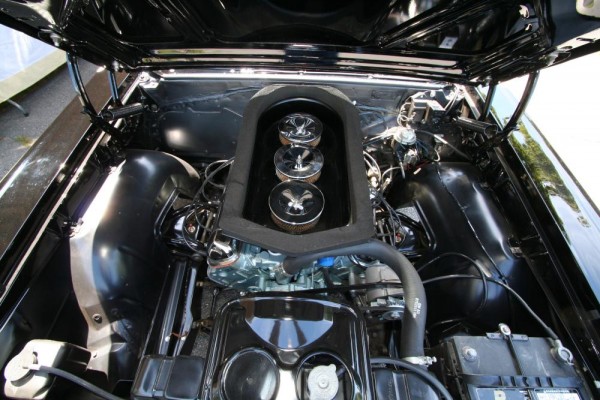 “About a year earlier and a week before the birth of our third child and only daughter, a white, though less than pristine, 1966 GTO convertible had wandered into our yard. Frankly, I remember feeling overwhelming joy at the arrival of only one of these two priceless blessings acquired almost simultaneously. In honest fact, I had to be recently reminded that the two blessed events occurred in such proximity. But that was 1978; this was 1979, and this car was even worse than the white one. Yet my husband, ever the optimist, could see only its potential. This facility, this ability to foresee the image of a restored old car I see as absolutely amazing, since he is totally incapable of picturing the finished effect of new flooring, new wall covering, or even new matching bedspread and curtains. In a way, I suppose I do understand this inclination but from the opposite end of the spectrum, since even the vision of a well restored old car does not fill me with carefree thoughts of happy, trouble free excursions off the beaten path. In this case anxiety quickly clenched the pit of my stomach. I knew what was going to happen. Merle assumed that the car had been raced, but he was unable to trace its origin back farther than 1972, so he simply shrugged and, while happily contemplating the sale of my lovely little Luxury Lemans station wagon, restored it for me to drive.

From that day forward my life was never to be the same. That restoration was the beginning of my involvement in the hobby whether I wanted to be involved or not. Most early incidents with the car were less than memorable, perhaps mostly because I never really stopped to think about how anyone, who knew what I was driving, perceived a woman transporting young children in a 1966 GTO. This was and is, you must understand, one of the original muscle cars, popular in the ‘60’s for power and performance. My husband, lover of history, especially automotive history, also calls it “the first real GTO,” since 1966 was the first year that the car claimed legitimate model status (1964 and 1965 GTO’s having resulted from an optional equipment package on the Pontiac Tempest). Had I thought much about my observers’ viewpoint, I might have responded. As it was, I was busy enough with those three kids, and I really didn’t care. I just drove. In retrospect I’m sure all my neighbors thought that I was either very patient or very crazy. In particular I remember an incident that made me rue the day Merle ever flew over one particular field.  One day, in the pouring rain, I started out across town with my toddler daughter along for the ride. On route 110 across from a Delaware, state office building, the car died. What was I to do? I pulled as far off the road as I could get and proceeded, carrying my daughter, dodging both traffic and torrents, to cross the highway to find a phone. I had to call my husband. Who else would be able to figure out how to fix this vehicle without charging me a small fortune? He came. He displayed no dismay at the interruption of his day or at the vulnerability of his car parked at the edge of a busy highway. With his usual equanimity, he casually shoved a wire somewhere, and the car ran again, but without me at the wheel. We traded cars, one GTO for another; but the red one, I was relatively confident, would get me where I wanted to go and back again.

After the incident in the rain, I decided that I needed to know how to fix the problem, in case it should occur again, so I asked Merle to identify the wire for me and show me what to do to it. I watched carefully, or so I thought, as he patiently raised the hood of the car and ascertained that the particular wire was snugly secured in its proper hole. Thus was I reassured that if I had another wire emergency while he was away, I would not panic, So I continued blissfully along with my daily routine until one morning while Merle was, of course, out of town, the car would not start. Now when I say “out of town,” I really mean out of town as in Madrid, Tehran, Okinawa, and Addis Ababa to name a few — not places so accessible that I could just pick up the phone and ask what to do. If I wanted to travel very far, I would have to fix it myself. Yes, we did have two other 1966 GTO’s, but one was parked on Dover Airforce Base at the 9th Military Airlift Command (MAC) squadron headquarters, and the other one –- well, who knows why the other one wasn’t mobile at the time. Merle was probably rebuilding some critical, functional part.

Proceeding under the assumption that my car would not start for the same reason that it had stopped before — probably not the most logical assumption, actually more gut, wife-of-an-old-car-freak intuition– there was nothing to do but open the hood to look in the area where I had previously watched Merle adjust the wire. My predicament was, however, that there appeared to be at least three times as many wires as had been there before. I swear! Undaunted, I knew there had to be a way to solve this puzzle, so I straightened my shoulders and went into the house to find a book. I have always firmly believed that if you can read, you can do anything. It was time to put philosophy to the test. That morning, if I hadn’t known it before, I learned that a chassis manual contains detailed wiring diagrams among a myriad of other doubtless helpful illustrations of how to assemble and disassemble a particular make of vehicle. I still wasn’t positive which wire I wanted to touch, but I had narrowed it down to whatever was connected to the distributor (a round device, located on the back of this particular engine, though on its way to obsolescence in modern engine compartments, which literally distributes the voltage from the ignition coil to the spark plugs in the engine) and decided just to push on all of them. After shoving each wire connected to the distributor into it as far as it would go, I held my breath and climbed into the car to turn the key. Much to my relief and self-sufficient pride, the engine turned over immediately. I was literally and figuratively in the driver’s seat. This car was truly mine. I was in control. My husband, upon his return, was slightly surprised but also greatly impressed by my resourcefulness.

Troubleshooting was not the only type of stressful situation the car got me into. I remember a chilling incident that occurred a few years later in an Oklahoma parking lot. In order to understand my initial apprehension in this situation, you have to understand something about who I am. While I do not embrace extreme feminism, I do believe women deserve equal treatment as human beings, and I find annoying certain epithets that reflect a male view of us as objects rather than people. Back to my story. One weekend afternoon, a rare, exhilarating occasion, when I managed to get out of the house without even one of my three children in tow, I headed out to shop. I had parked my car and walked several feet when I heard a male voice yell, “Hey Babe!” I froze. There were no other women in the vicinity, so he had to be calling to me. Me??? My sheltered wife/mother psyche felt violated, accosted, just plain scared, but that was ridiculous. It was broad daylight in a public place. I could deal with this situation. I turned, with what I hoped was a disarming scowl of disapproval, to face him. As it turned out, he was young and just wanted to ask some questions about the car. The encounter ended innocently enough, but the memory of it has marked my consciousness forever. My initial, apprehensive reaction to his shout stemmed, I’m sure, from a subliminal fear that because I was driving a fast car, I was being stereotyped as a fast woman, something that I definitely was not. That is an ominous feeling.

I drove “the green car,” as we called it because it was painted two-tone green –- actually Reef Turquoise over Marina Turquoise, until 1985. I have to admit that I had gotten somewhat attached to it by that time, but we had moved again, and both the stick shift and New England winters were wearing me down. The car came off the road in 1985 to get re-restored, and I got a new little Pontiac 6000 station wagon, our first brand new car in eleven years and one clearly more in keeping with my own self-image. Over the next five years the green car was dismantled once more, the frame sand blasted and painted, and numerous GTO, equipment options collected and shelved for its future adornment. Then came the big shock. I knew and even began to regret that I might never drive the little green car again. The advent of Pontiac Historic Services had made it possible for Merle to trace the origin of my little GTO.”