Here are the top 5 first-generation Chevy Trailblazer problems that we have come across in the model years 2002 to 2009. We highlight the most common failures and issues that most owners experience and offer important tips on how to fix them. If you own a Trailblazer or know someone that does, this article will help you know what to expect.

The fuel level sensor is located inside the gas tank. It helps you to monitor your vehicle’s fuel level so that you can know when to add more. When it goes bad, one of the most common symptoms that you’ll notice is having an erratic fuel gauge.

The gauge may bounce around or stay at zero even after filling your gas tank. You may also get a check engine light that tells you there’s something wrong with the fuel level sensor. The sensor has a spot that tends to wear out, leaving an open circuit.

To confirm that the problem is indeed caused by the sensor, you can grab the vehicle and give it a little shake. Have the key in the ON position while at it. This helps to slosh the fuel inside the tank and allows the fuel gauge to bounce back to where it’s supposed to be.

You’ll need to replace the fuel level sensor to fix the problem. This requires you to take out the fuel tank. It’s best if there’s not much fuel in it as it makes it easier to handle.

The blower motor resistor controls the speed of the blower motor fan. It does this by controlling the amount of current flowing from the fan switch to the fan. The resistor tends to go bad in the 1st gen Chevy Trailblazer, causing some of the fan speed settings to fail.

You’ll mostly notice this when you turn your heat on and select the lower speeds on your AC. The problem could be caused by a blower motor that is sucking too much amperage and causing the resistor to burn internally. You’ll need to replace the resistor and check the blower motor for any damages.

Symptoms of a Bad Fan Clutch

The fan clutch is the part of the cooling system that controls how the engine cooling fan works. When it engages, it allows the fan to be driven by engine power so as to direct cool air to the engine.

The 2002-2008 Chevy Trailblazer comes with an electric actuated fan clutch. When it goes bad, it creates a noise that may sound like a jet plane trying to take off. You may also come across a check engine light or clicking noises that come from the fan itself.

How to Fix a Bad Fan Clutch

This is one of the harder Chevy Trailblazer problems to fix. You’ll need to remove the radiator fan shroud, the securing bolts, and pull everything out. If you find it hard to pull out the fan, wiggle it to loosen it. The next step would be to disconnect the connector that connects the wire that goes across to free the fan completely.

The two symptoms of failed valve seals on the 1st gen Trailblazer that you’re most likely to get include an engine that runs rough and a check engine light that’s flashing. The Trailblazer comes with an EGR valve in some model years that causes some parts of the head to get hotter than others. This then causes damage to the valve seats.

The valve seats are the surfaces on which the intake or exhaust valves sit when they are closed. As one of the most common Chevy Trailblazer problems, they tend to wear out and cause engine misfires. The misfire is caused by a lack of compression due to wear.

How to Fix Bad Valve Seats

You’ll need to have the seats refinished or replaced. It’s also a good idea to check the spark plugs and ignition coils as those could be behind the misfire as well. Sometimes, moisture tends to get into the fourth coil causing further damage. Clean out the moisture and replace the coil if you need to.

Our last item on this list of Chevy Trailblazer problems happens to be the front wheel bearings. When these go bad, they tend to produce a howling sound. You may also hear sounds from the front part of the vehicle that mimic an airplane that’s about to take off.

To diagnose the front wheel bearings, you’ll need to raise the car to a reasonable height and shake the wheels side-to-side. You want to see if there’s any excessive play or a similar noise like the one you heard while driving.

There are no adjustments on the market for bad front wheel bearings in the 2002-2008 Chevy Trailblazer. You’ll have to replace the wheel hub assembly to fix the problem.

Do-It Yourself: Fix Your Own Chevy Trailblazer

Learn how to fix your own 1st gen Chevy Trailblazer with 1A Auto’s how-to videos that have step-by-step instructions with expert mechanics for parts like wheel hubs, tail lights, mirrors, and more. 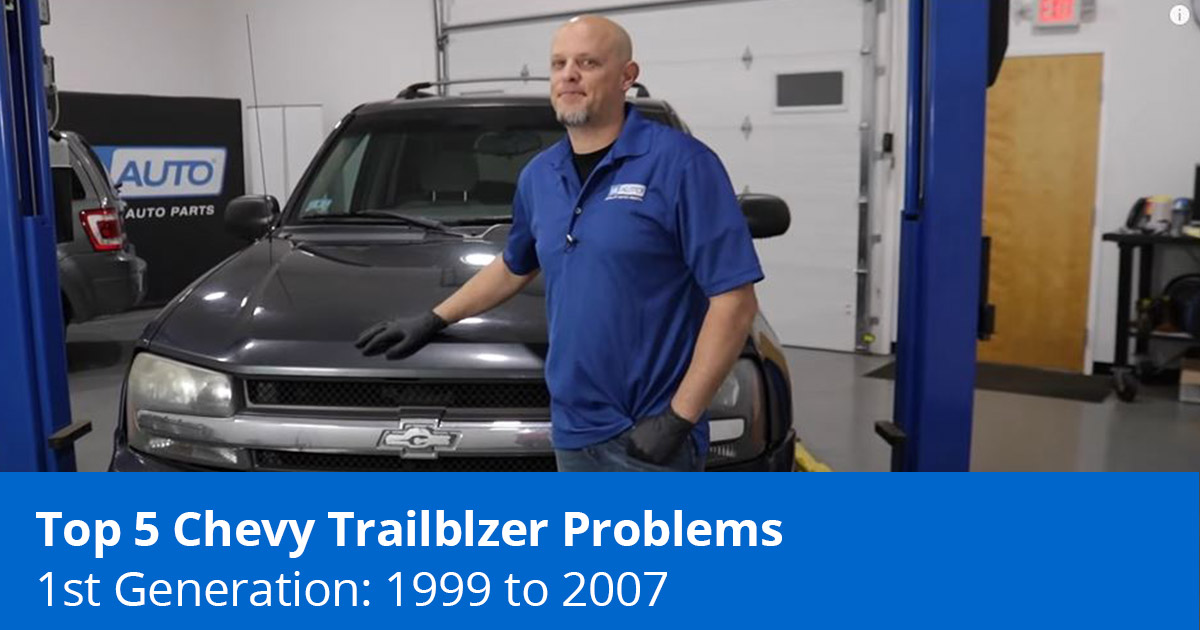