When you have a faulty fuel injector, your engine may run rough or misfire. This could be accompanied by vibrations that cut across the vehicle from the engine compartment. In some cases, you may also see the engine light come on. While these are some of the most common bad fuel injector symptoms, they are not unique to the problem.

Watch the video below or read our step-by-step guide below where our mechanics show you how to diagnose and fix a bad fuel injector.

How to Diagnose and Fix Bad Fuel Injector Symptoms

You can also have a misfire when there’s an issue with the spark plugs, the wires connected to the spark plugs, or the ignition coils. In this post, we will teach you how to diagnose a bad fuel injector, how to determine where the problem is, and how to fix it.

What is a fuel injector?

A fuel injector is a valve mechanism designed to spray liquid fuel erratically into an engine cylinder. The fuel is passed through a nozzle that helps to distribute it evenly for optimum efficiency and combustion. In a typical engine, each cylinder will have its own fuel injector.

Some older cars use a TBI – a ‘throttle body injection’ mechanism that injects fuel directly into the throttle body. Newer vehicles use direct injection, where the fuel is directly injected into the combustion chamber. In this post, we’ll take a look at multi-port injection – the middle ground between the two mechanisms and the most commonly used.

How does multi-port injection work?

A typical multi-port injection system features a fuel rail that sends pressurized fuel first into the fuel injectors, then into the intake runners, and into the combustion chamber through the intake valves.

Fuel injectors have an electromagnet just near the nozzle that’s controlled by the PCM. They also have wires connected to the side that power them, ground them, and help to control their valves. The valves move in and out repeatedly to atomize the fuel and send it to the engine cylinders.

How do I check fuel injectors?

If you experience symptoms of a bad fuel injector, there are four ways you can go about finding the bad injector. The following steps will help you to just do that. You can also check out the video.

Step 1: Use an automotive scan tool to identify a bad fuel injector

An automotive scan tool is an electronic device that can help you determine which cylinder is misfiring. It will normally generate a diagnostic trouble code for the bad injector. Automotive scanners are also useful in identifying a break in the circuit.

When the engine is running, the valve fitted at the end of the fuel injector opens and closes repeatedly to let fuel into the intake runner. This generates a tapping sound.

To identify where the problem is, place an automotive or mechanic’s stethoscope on each injector. Listen and compare the sounds they produce. When you find an injector that’s not making any noise, that’s the one you should take a look at.

An electronic fuel injector quick probe helps to detect the vibration frequencies that arise when the injector pintle opens. All you have to do is place it on each injector while the engine is running. It will show you which injector is not producing any vibrations.

Compare the resistance between all the injectors using a multimeter. Connect one lead to one side of the injector and the other lead to the other side. Look for the fuel injector whose specs are skewed. Sometimes, you can still get the correct readings on an injector that’s stuck on the inside. Be sure to use any of the other three methods to confirm.

How to determine the cause of bad fuel injector symptoms

Once you find the fuel injector that’s not working, it’s time to figure out why. The problem could be the injector itself or the signal sent to the injector. The steps below will help you find out what is really causing your engine to misfire or run rough.

Step 1: Check the wiring and terminals that connect to each fuel injector

Sometimes, a corroded connector or damaged wire could be the cause of some of the symptoms you experience when you have a bad fuel injector. Check to see if the connector has any rust on it. Take a look at the wires as well as they could be chewed by rodents.

A noid light helps to determine whether everything that’s connected to the injector is working. Connect your noid light into the connector and start the engine. Check if the noid light is flashing. If it is, the problem is with the fuel injector and not the power connection.

If it’s not, you could have a bad Powertrain Control Module (PCM) or Engine Control Module (ECM). There could also be a bad fuse, wire, or connector that’s preventing the power from reaching the injector.

If all the wiring and connections are working as required, you could have an injector that’s leaking too much fuel into the cylinder. It still works mechanically but can be difficult to identify if you don’t have the right tools. You can always swap injectors to confirm.

Sometimes, a fuel injector could be partially clogged by dirt, debris, or carbon buildup. If you catch this problem early, you can use a cleaner to unclog it. This saves you from having to replace it.

How to replace fuel injectors

Step 1: Open the hood of your car and start the vehicle.

Step 2: Locate the fuse box and unplug the fuel pump relay. You can identify the relay from the description provided underneath the cover. You may need some slip-joint pliers to help pull it out. Once the fuse is out, let the vehicle turn itself off as it runs out of gas.

Step 3: Turn off the ignition switch and reconnect your fuel pump relay.

Step 4: Remove the engine cover by unscrewing the bolt that secures it. We used an 8mm socket and ratchet to do this on our vehicle.

Step 5: Locate the bad fuel injector on either side of the engine.

Step 6: To access the injectors, you’ll need to unscrew the bolts that secure the fuel rail. On our vehicle, there were two bolts on each side. We used a 10mm socket and ratchet to remove them.

Step 7: Pry out the fuel rail slightly from its position once the bolts are out. You may need a pry bar for this.

Step 8: Look for any retaining clips that are holding the bad fuel injector in place. Once you release those clips, disconnect the harness that connects to the injector.

Step 9: Pull the fuel injector from its position and replace it with a new one. You can put a rag underneath to catch any leaking fuel. Secure the new injector with the retaining clips that held the old one in place.

Step 10: Push the fuel rail back into its position and replace the corresponding bolts. Reconnect the harness to the new injector and clip it in place.

Step 11: Put your engine cover back on and tighten its bolt.

What happens when you have a bad fuel injector?

When you have a bad fuel injector, the engine misfires and the motor starts to feel as if it’s sputtering. You may experience vibrations while in the car. This is often caused by a bad fuel injector that interferes with the balance between the fuel and air that’s entering your engine.

How can you tell if you got a bad fuel injector?

Some of the symptoms of a bad fuel injector include a misfiring engine, a car that struggles to start or won’t start at all, engine performance issues, the frequent smell of fuel, poor idles, failure of the engine to reach its full RPM, and a check engine light that’s constantly on.

Can you drive with a bad fuel injector?

Your car will still run if it has a bad fuel injector. However, it is not advisable to drive it in such a condition. The problem could lead to serious issues that can cause engine damage.

How much does it cost to replace a bad fuel injector?

The average cost of replacing all your fuel injectors lies between $800 and $1,450. This depends on the make and model of your vehicle. If you wish to replace the injectors yourself, parts could cost you between $600 and $1,200. You’ll be able to save on labor worth $200 to $250. 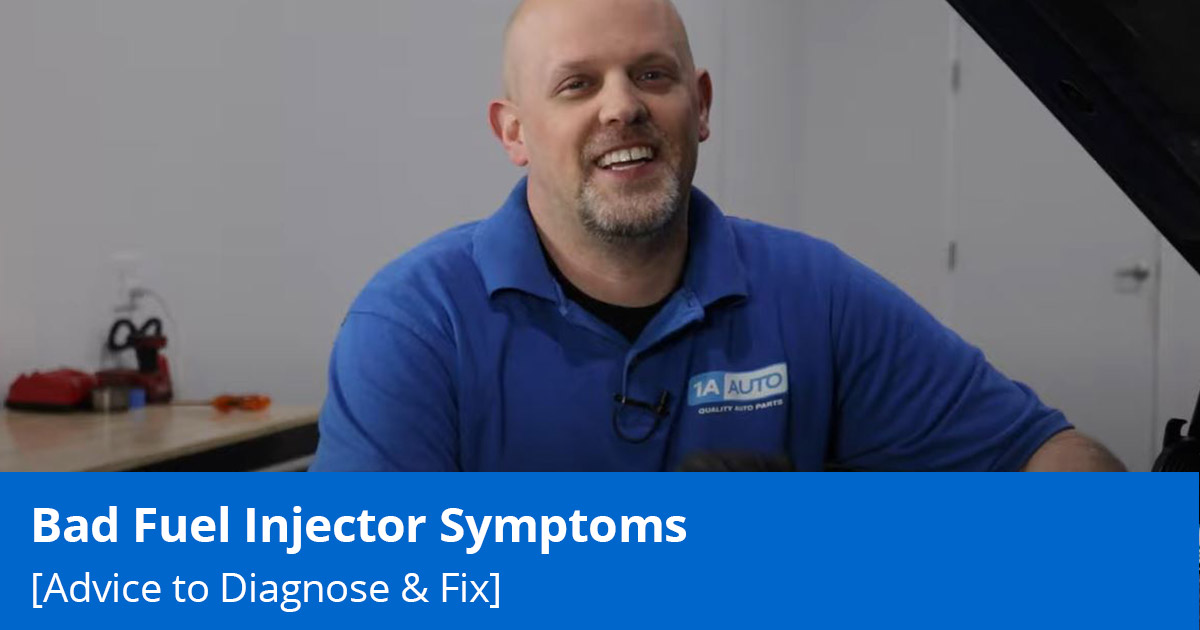