The Chevrolet Equinox has been around since 2005. It comes powered by a 2.4-liter four-cylinder engine, a 3.0-liter V6, or a 3.6-liter V6 engine. Like many cars, the Equinox has issues in some of the models produced in the past. Here we will discuss common Chevrolet Equinox problems with their 2nd Generation SUV.

This is the model that debuted in 2010 and saw production until 2017. We’ll also provide possible solutions to these most common Chevrolet Equinox problems to help keep your car operational for a long time.

Save Up to 50% Off Chevy Equinox Auto Parts and More

A typical combustion engine consists of a fixed cylinder(s) and a moving piston(s). A mixture of air and fuel get into the cylinder through the intake valve. Once inside, the mixture burns to release energy. The combustion process releases gases that push the piston down the cylinder. The downward push then causes the crankshaft to rotate, pushing the piston back up.

This expels the burnt gases through the exhaust valve. The intake and exhaust valves are controlled by the camshaft. To make sure they open and close at the right time, a timing chain is used to connect the camshaft to the crankshaft to ensure the two are rotating in synchrony.

If the timing chain works properly, the valves will open and close just in time. If it’s stretched, it will distort this process and affect the timing. The car’s computer will then think that something is wrong and bring up a Check Engine light.

It is one of the most common Chevrolet Equinox problems that is also difficult to diagnose. You’ll need to take the front part of the engine apart to access the timing chain. If the tensioners are pushed out a little bit, then the chain is definitely stretched. A way to prevent this is to change your oil regularly and ensure it’s always at the recommended level.

This is one of the more common problems encountered in the Chevy Equinox that runs on the four-cylinder engine. These engines tend to burn a lot of oil. General Motors states that your Chevy Equinox should run less than one quart of oil within 2,000 miles.

However, a lot of users have complained about having to add up to four or more quarts per month. If this is your case, here are a few places you can check:

You want to check that your positive crankcase ventilation (PCV) system is working properly. If you see a lot of oil running through the PCV valve, you may need a new valve cover.

Valve seals prevent oil from getting to the engine’s combustion chamber. This keeps the air/fuel mixture clean and prevents contamination. A valve seal that’s damaged will cause oil to leak out and get burned excessively. This then causes the amount of oil available to decrease at an abnormal rate.

Oil leaks are also a pretty common problem in the second-generation Chevy Equinox. The main culprit behind this is usually a bad rear main seal which causes oil to leak just near the back of the oil pan where it meets the transmission.

General Motors has a technical service bulletin (TSB) for excessive oil consumption in the 2010-17 Chevy Equinox. One of the things they do is to replace piston rings that are not sealing properly.

These rings help to maintain the right quantity of oil between the cylinder wall and the piston. They also regulate oil consumption by removing excessive oil from the walls and sending it back into the sump.

When they get stuck inside the pistons or fail to seal properly, the oil will get by and burn. This then causes excessive oil consumption. Replacing the piston rings is a relatively challenging task. You’ll have to take the engine’s cylinder head(s) off, pull out the pistons, and replace them.

The VVT solenoids help to control the flow of oil depending on the load and speed of the engine. Their failure is more common in the four-cylinder Chevy Equinox and can even cause the vehicle to stall. You may end up with an engine P0010 or P0011 code.

There are two VVT solenoids that control oil flow in the four-cylinder engine. One is connected to the intake camshaft and the other to the exhaust camshaft. These are easy to replace. All you need to do is first pull the engine cover off and disconnect the solenoid connectors. The valves are held by a 10 mm bolt just below them.

Clean out any debris and unscrew the solenoids. You’ll have to replace them with new ones. They each have a unique part number and cannot be interchanged. Remember to lubricate the new solenoids before sliding them in and ensure your oil is at the recommended level. Oil that is low or of poor quality can cause the valves to go bad.

The throttle body controls the quantity of air getting into the engine when the driver steps on the accelerator pedal. It has a moving flap called a throttle blade that’s connected to the gas pedal. The blade opens wider when you step on the gas to allow more air into the engine. This generates more power and allows the car to move faster.

You may end up with a P2135 code for the throttle body or a P2138 code for the accelerator pedal position when there’s a problem with the sensors. The two correlation codes are very similar.

You may also end up with a ‘Check Engine’ light, or an ‘Engine Power is Reduced’ message. The latter comes up when the computer doesn’t want to increase the speed of the car because it doesn’t know where the throttle blade is.

You always want to check your connections. There could mice chewing your wires or terminals that are spread out. Check the wiring at both the throttle body and the accelerator pedal.

The evaporation emission control system (EVAP) prevents the gas fumes found in the gas tank from getting released into the atmosphere. This helps to keep the smell of gas inside the car and prevents pollution.

An EVAP code is also one of the most common problems you’ll encounter in the Chevy Equinox. It can be caused by a gas cap that’s loose or worn out, or a bad purge valve. The first thing you always want to do is pull out the gas cap, check its seal for damages and find out if it clicks in place when you put it back. If it feels loose or has a seal that’s worn out, you’ll need to replace it.

If your gas cap checks out okay, find the purge solenoid. Check its connectors for any damaged wires or corroded terminals. If you find any of these problems, do not worry for these are easy parts to replace. 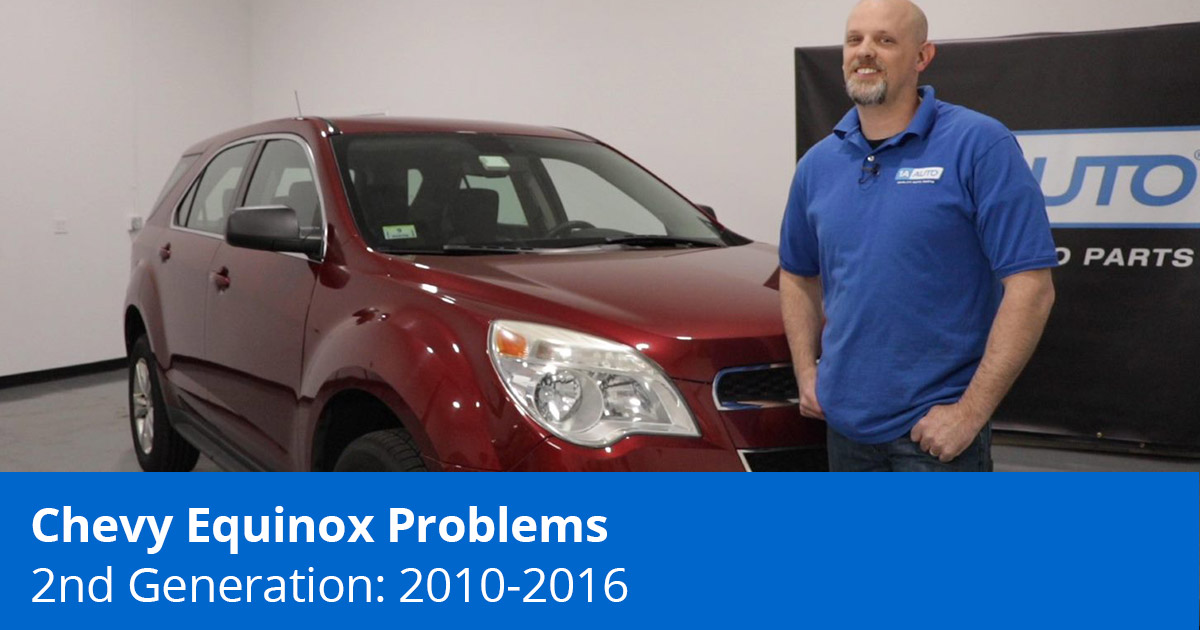 Article Name
Common Chevrolet Equinox Problems (2010-2017)
Description
The Chevrolet Equinox has been around since 2005. It comes powered by a 2.4-liter four-cylinder engine, a 3.0-liter V6, or a 3.6-liter V6 engine.
Author
1A Auto Team
Publisher Name
1A Auto
Publisher Logo