I come from a long line of car-guys (and gals!), so when looking through old family photo albums, I occasionally discover automotive gold.  This was the case on Thanksgiving 2012. I was scouring through old albums looking for pictures of muscle cars that my parents, aunts, and uncles once owned, and there it was.  Amidst some blurry pictures of “Jungle Jim’s” famous funny car, was a New England Dragway entrance ticket from August 6th 1972. How intriguing I thought… I pulled it out of the album and flipped over the business card that was with it, only to discover something truly incredible. The business card was actually a time slip from my dad’s voyage down the quarter mile. And how quick & fast was he? Well well well. It was a mind-bending 18.17 second run down the 1320 at 72.87 miles per hour. For the lose… Literally. 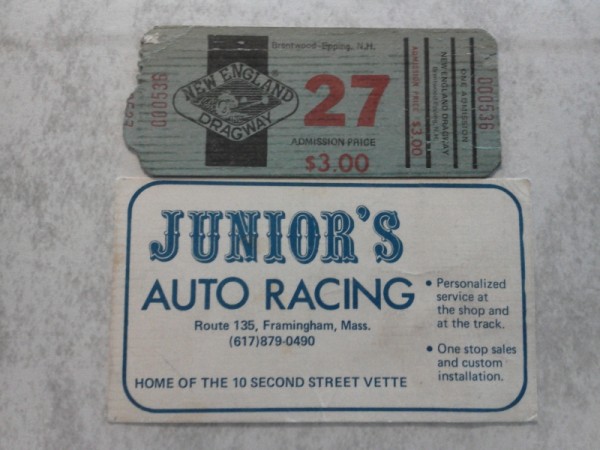 Now. Once your laughter comes to an end, you’ll likely want to know what kind of car he was cruising in when he locked down these incredibly slow numbers. Legend has it, that this whopper of a time slip was achieved in my mom’s “new” 72 Barracuda with a 318 and a floor shifted 3-speed manual.  Yes, with Hemi dreams and a financially doable 318 3-speed reality, the beautiful new Barracuda was pretty darn slow. From what I understand, many other cars of that era were equally sleepy on the drag strip.

So. What can we gather from all of this? Well, just remember that for every big block Chevelle and 4-speed, torque-monster 455 Buick GS out there in the early 1970’s, there were 20 slow motion grocery getter’s with the same body. It seems that by some miracle, every muscle car that we see these days has “matching number” Hemi, Max wedge, big block, SOHC-head, etc. engines still in them… I wonder if or when the matching number straight six models will end up being the really rare ones?