Learn to Diagnose and Fix Catalytic Converter Issues like a Mechanic

So, your Check Engine light is on, and you’ve got either a P0420 or P0430 code, on your OBD-II scanner. This  “Catalyst system efficiency below threshold” code is triggered when your car’s computer (the powertrain or engine control module (PCM or ECM)) detects a catalytic converter issue.

In this video, our mechanic explains how a catalytic converter’s efficiency is reduced when it’s clogged, which triggers one of these two error codes. Watch now:

What are these “Catalyst system efficiency below threshold” codes, and how do they differ? Each code indicates where the problem triggering them is located:

According to our mechanic, “Generally, this code means that you need a new catalytic converter.”

When your car’s catalytic converter is working correctly, it breaks down pollutants that result during the combustion process so that they’re less toxic and less are released by the time they’re emitted as exhaust.

A code P0420 or P0430 means a catalytic converter isn’t performing as efficiently as it should. When this happens, it’s not able to break down all those harmful pollutants, and still releases them.

In the video above, our mechanic shows us two catalytic converters—one that’s clogged, and one that isn’t. She explains that the clogged catalytic converter’s filter, often referred to as “honeycomb,” prevents the correct amount of air from getting through, which can trigger a P0420 or P0430.

Usually, by the time you’re aware of one of these codes, it’s too late—the damage is done to your catalytic converter. If it isn’t replaced, it can get worse, becoming more plugged, which can cause weak acceleration.

Other causes can include:

In this video, our mechanic explains how a bad O2 sensor can trigger a P0420 code.

Our mechanic Andy says that a bad O2 sensor, or one that’s reading incorrectly, can cause a P0420 or P0430. However, too much fuel from a leaky fuel injector could be what caused the O2 sensor to go bad in the first place. He said they can also sometimes get stuck. Even if it’s clear that your catalytic converter needs to be replaced because its filter is clogged, Andy says it may be best to replace your O2 sensors at the same time, rather than take a chance.

If the downstream O2 sensor detects a limited amount of carbon dioxide, which means the catalytic converter isn’t able to effectively break down pollutants, she says that’s when a P0420 code is triggered.

To learn more about the difference between downstream and upstream O2 sensors from one of our mechanics, watch this video:

O2 Sensors is it Upstream or Downstream?

Our mechanic Andy says the reason the 2009 Chevy Malibu he works on in the video below has a P0420 code is that the two o2 sensors’ readings are off, and detect an issue in the catalytic converter.

Watch the full video for his expert help diagnosing and resolving a code P0420:

P0420 Check engine light how to fix it yourself

Check your catalytic converter for leaks

Andy recommends inspecting the back of your catalytic converter for leaks. That could cause a faulty reading from the downstream, or back, o2 sensor.

Inspect your catalytic converter’s filter, or screen, for clogging

Other items to check out

Even though as Andy tells us, 99.9 percent of the time, a code P0420 or P0430 means you’ll need to replace your catalytic converter, he recommends checking out a few other items before replacing it:

Depending on how many oxygen sensors you replace, the cost could be minimal, but you can find out how much it will cost for your year, make, and model on 1aauto.com.

Shop parts featured in this article: 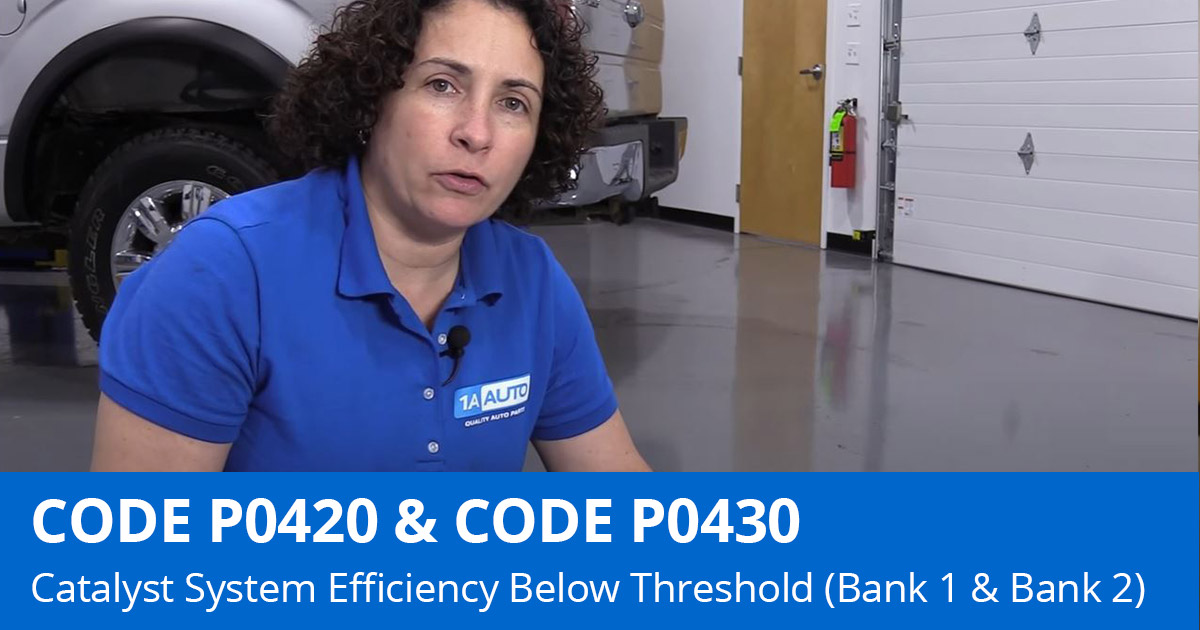 Article Name
Check Engine Light and P0420 and P0430 Codes
Description
So, your Check Engine light is on, and you’ve got either a P0420 or P0430 code, on your OBD-II scanner. This “Catalyst system efficiency below threshold” code is triggered when your car’s computer (the powertrain or engine control module (PCM or ECM)) detects a catalytic converter issue.
Author
1A Auto Team
Publisher Name
1A Auto
Publisher Logo