If your check engine light is on and your scan tool lets you know your car has a P0496 code, which is an Evaporative Emission Control (EVAP) System code, this means something is causing fuel vapors to escape from your car that shouldn’t.

In this video, our mechanic shows you how to diagnose the problem that triggered P0496 using common EVAP purge valve tests. Watch now:

Code P0496 is defined as “EVAP Flow During Non-Purge Condition.” This means the computer has detected a problem in either the emissions or fuel systems.

What typically triggers this code is an EVAP purge (or EVAP purge volume control or canister purge) valve that isn’t working correctly.

Other than the check engine light staring at you, you may not have any noticeable changes in your vehicle with code P0496. However, as with most automotive issues, it’s best to address a problems as soon as possible to prevent any further damage, or unnecessary vehicle emissions.

What Are Common P0496 Symptoms?

The first thing you should check whenever your car has a P0496 code is your gas cap—make sure it’s not loose because a loose gas cap can trigger a P0496.

If your cap isn’t loose, you should also unscrew and inspect its seal to make sure there isn’t anything inside the cap that could be causing the problem, such as damage or debris.

More on how to inspect a gas cap

With the engine off, remove the hose from the fuel tank that connects to the purge volume control valve (in most vehicles, this valve is normally located near or on the intake manifold), and disconnect the valve’s electrical connector (beginning at 1:24 in the video above).

With the engine running, use a vacuum gauge, or even your finger, to find out whether any vacuum is coming from the valve where the hose was removed. If there is vacuum, this means the purge valve is stuck open, allowing fuel vapors to escape. You won’t find any vacuum during this test if the purge valve wasn’t stuck open and working correctly.

If you have a purge valve stuck open, you’ll need to replace it.

You can also do a similar test to the “Stuck Open” condition test with the engine off, that will also help you determine whether a purge valve is bad.

With the engine off, remove the purge valve by using a screwdriver to gently pry the bracket, and once the valve is loose, slide it out (1:58 in the video).

With a hose connected to the valve, you can either try blowing through it from either direction or connect a vacuum pump to test whether air comes out (2:17). Make sure everything is connected properly before testing this. If air does come out, that means there’s a leak, and you’ll need to replace the purge valve.

After replacing the purge valve, use a scan tool to clear the P0496 code and drive your car to make sure everything is working properly. If you have a more powerful scan tool, you should be able to test the EVAP system, too.

Need any of the parts mentioned in this article? 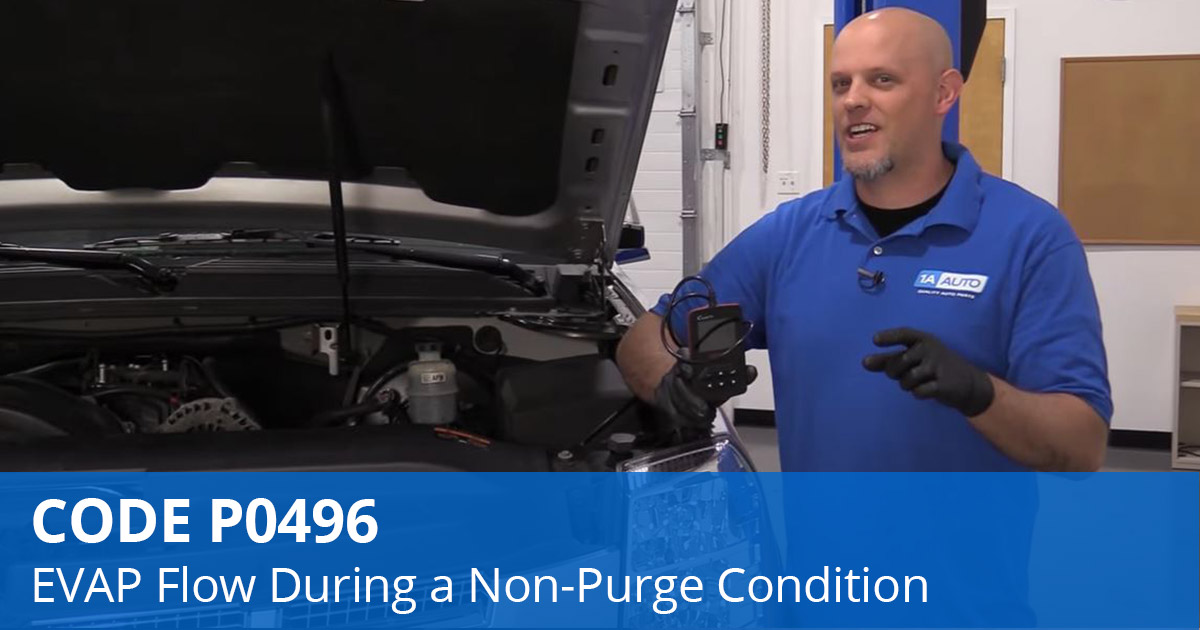 Article Name
P0496 Code Appeared? - Diagnose an EVAP System Code - 1A Auto
Description
Is your check engine light on and your car or truck is hard to start sometimes? That sounds like it could be an issue with your EVAP System. Our mechanic shows you how to diagnose a P0496 code.
Author
1A Auto Team
Publisher Name
1A Auto
Publisher Logo