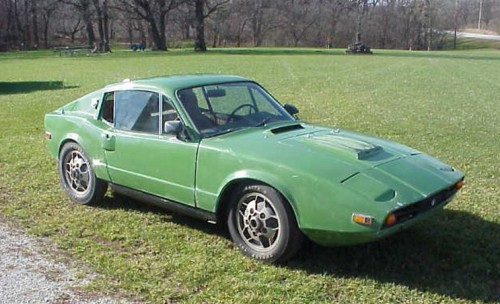 Today I was going to do a most vs least expensive car on eBay post, but then I saw this green gem hiding amidst some scrap metal on eBay. Let me start off by saying, I’ve owned a Saab before, but I never drank the kool-aid.  They do have many cool features, decent horsepower, well thought out designs, and comfy interiors.  They also built the Sonett.

The Sonett was a special little rascal that somehow made it into production between 66-74.  It was intended to compete with the Triumph’s, MG’s, and Austin-Healey’s, but it never really “took off” (ha!…Saab).  Now the V-4, let’s talk about it.  The Sonett was in fact powered by a Ford Taunus V-4 engine (Not Taurus……. TauNus, with an N). It made around 60 horsepower, had timing gears  instead of a belt or chain (pretty cool?), and sent power through the transmission to the front wheels.  Wait…front?..what? Yes, FRONT wheels. This car is not only filled with oddball V4 technology, but it is front wheel drive.  It’s almost like all the airplane engineers at Saab got together in the 1960’s and said “Let’s take everything we know about sports cars and throw it out the window! Then let’s build a sports car! Here Here!! ”   Ok, ok, the Saab crew did get the fiberglass body aspect nailed down and the car didn’t seem to have any weight attached that wasn’t 100% necessary.  Bonus points for that.  When the Sonnet equation is added up at the end of the day, you had a super light, ok handling, front wheel drive, underpowered (though not in comparison to it’s peers I suppose), low production sports car.   Win ? Lose? I’ll let you decide.

Now that you know the basics of the Sonett, it’s time to consider a purchase.  The car pictured is obviously awesome because of it’s color and aggressive hood bulge.  Don’t let the whole “I can see my feet when I look inside the rear window” thing scare you away.  The body looks fairly solid and straight, and it is honestly a very rare car. Not to mention all of the parts are there where they belong.  I’m thinking that in the right hands, this could be on on the road again in short order.  You won’t be winning trophies and sipping a perfectly aged glass of Merlot at the Pebble Beach Concours D’Elegance, but you will likely make some friends at cruise nights, and save a piece of rolling history.  That’s what this whole “car thing” is really about anyway.  For $800, somebody should grab this thing and hit the streets with it.

4 thoughts to “Saab Sonett: The V-4 That You’ve Always Wanted.”