Most cars today have computers that control their performance. Whether you own a sedan, truck, or SUV, you get to use your car with the help of an internal computer that ensures the vehicle runs as it should. It’s also responsible for alerting you when things go wrong. This is typically by generating and storing an OBD-II code or diagnostic trouble codes that you’ll see on a scan tool.

The P0300 code does not normally appear on its own. It pops up when you have multiple or random engine misfires. This means that the internal computer has detected that more than one of your engine’s cylinders is not firing as it should.

Some of the most common symptoms that you’ll notice when you have a P0300 code include a Check Engine Light and a shaking steering wheel when the car is at idle. The shaking occurs when the timings for combustion and exhaust gases aren’t right.

The problem could be occurring due to many things. For starters, you could have a fuel supply problem. Other times, it could be due to a bad fuel pump, a failing fuel pressure regulator, or a clogged fuel filter. Major vacuum leaks and EGR valve leaks are also common causes.

A P0300 code appears alongside other codes that must be diagnosed first to find out the exact location of the misfire. These codes are explained in the second point below.

P0301-P0308 are individual cylinder misfire OBD-II codes that pop up when either of the engine cylinders is not contributing its fair share of power. This means that the cylinder in question is not burning fuel efficiently.

To diagnose and fix the problem, you could always start by checking the most common suspects. These include worn spark plugs, a bad fuel delivery system, damaged plug wires, bad engine coils, a bad fuel injector, and worn valve seals.

The P0420 and P0430 are OBD-II codes that are stored in the car’s computer when you have a problem with your catalytic converter. The former will show up in a four-cylinder engine while the latter in a six- or eight-cylinder engine.

The catalytic converter is a small device that helps to convert pollutants and toxic gases present in exhaust fumes into less-toxic gases. It does this by burning some of the hydrocarbons found in combustion gases. This helps to conserve the environment and prevent harmful gases from being released into the atmosphere.

Some of the symptoms you might notice when you have a bad catalytic converter include a funny sulfur-like smell, poor or diminishing fuel economy, an engine misfire, or an overall lack of power coming from the engine.

P0141 is an OBD-II code that stands for O2 Sensor Heater Circuit Malfunction. It refers specifically to the downstream O2 sensor which is found right after the catalytic converter. When the car’s computer sends a code to a malfunctioning O2 sensor, the sensor sends back a code to show that it has a problem.

The problem could be caused related to resistance or an incomplete circuit. You’ll most likely notice a Check Engine Light, decreased fuel economy, or an engine that’s running rough. The common way of diagnosing and fixing this problem is to check and repair the electrical connections, replace the fuse at the heater circuit, or replace the O2 sensor.

The P0446 OBD-II code comes down to an issue with the EVAP system and the venting of the fuel system. To be specific, it tells you that you have a problem with the evaporative emission canister vent solenoid. This is the part of the car’s emission system that is responsible for capturing and recirculating evaporating emissions from the fuel and back into the engine.

When the fuel system is clogged up with dust, dirt, and debris, it may not be able to vent properly. Some of the symptoms that you may notice include a check engine light and in rare cases, a fuel odor. Pinpointing the problem may require you to perform an extensive diagnosis since it can be caused by several other faulty parts.

While still addressing the EVAP system, P0455 is another one of the diagnostic trouble codes that pops up when the computer detects a major leak in the vehicle’s Evaporative Emission Control System. What this means is that you have gasoline vapors escaping from the fuel tank and into the atmosphere.

The first thing that you need to do is check the gas cap. It could be that the seal is cracked or damaged. Other causes include an EVAP hose that is disconnected or cracked, a purge valve solenoid that is left open, a cracked or damaged charcoal canister, or a vent control valve that is stuck open.

Two of the most common symptoms here include a Check Engine Light and noticing the smell of gasoline around the tank or filler area. It’s also likely that the smell could be originating from the engine’s evaporative lines as well.

A P0171 or P0174 is an OBD-II code that means your engine has a lean running condition. Simply put, it’s burning too much air compared to fuel. It could be that it’s receiving too much air or too little fuel.

Some of the most common symptoms include a Check Engine Light, a hesitant or coughing engine, or loss of power. This can be caused by a bad fuel pump, a bad mass airflow sensor, disconnected hoses, faulty fuel injectors, a clogged fuel filter, a bad fuel pressure regulator, and so on. To keep the air/fuel ratio accurate, set the fuel and vacuum pressure to stay within the manufacturer’s specifications when fixing the problem.

A C0221 code indicates that you have a problem with the Right Front Wheel Speed Sensor. The sensor is a component within the Anti-lock Brake System (ABS) that monitors the rotational speed of the tires and sends the information to the ABS control module.

The two most common symptoms that you might notice when the sensor goes bad include an Anti-Lock Brake System (ABS) warning light that is on or a Check Engine Light. The issue could be caused by a faulty sensor, an open or shorted front speed sensor harness, or poor electrical connection.

A bad sensor causes the ABS to be disabled. This will not hamper your ability to slow down or come to a complete stop. However, it may cause the tires to slide when you step on the brakes while driving on a slippery surface.

Here are the top 8 most common OBD-II trouble codes in cars, trucks, and SUVs. Learn what they mean, their possible causes, and fixes. 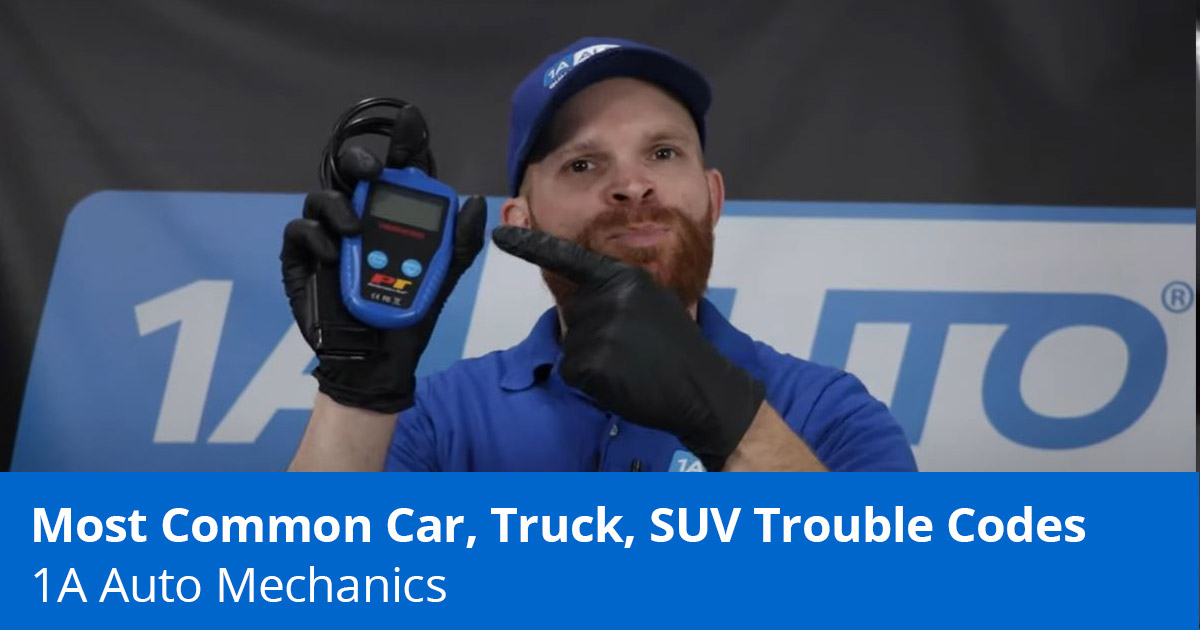 Article Name
8 Most Common Diagnostic Trouble Codes
Description
Most cars today have computers that control their performance. Whether you own a sedan, truck, or SUV, you get to use your car with the help of an internal computer that ensures the vehicle runs as it should. It’s also responsible for alerting you when things go wrong. This is typically by generating and storing an OBD-II code or diagnostic trouble codes that you’ll see on a scan tool.
Author
1A Auto Team
Publisher Name
1A Auto
Publisher Logo