The Toyota Corolla is a popular model that has existed for a long time. While Toyota is known for its reliability, every car model has its own common problems, including the 9th gen Corolla. Here are the top problems with the 9th generation Toyota Corolla, years 2002 to 2008.

How to Fix Master Cylinder Failure

How to Fix a Bad Timing Chain Tensioner

VVT timing issues can fluctuate the revolutions per minute (RPMs) at idle. A drain plug can clog if maintenance/oil changes are not kept up.

How to Fix VVT Issues

VVT solenoid is on the front side of the engine on the passenger side.

Symptoms of Starting Problems on the 2002 to 2008 Toyota Corolla

Causes of a Bad Starter

The starter won’t usually have a problem until after driving 100,000 miles, but they commonly fail on the 9th gen Corolla and won’t start the engine. If there is an issue with the starter solenoid, power will not get to the starter. If there is a whirring noise after the engine starts, the Bendix drive in the starter is beginning to wear.

How to Fix a Bad Starter

Temporary Fix: Tap the Starter with a Hammer

Check the wiring for green corrosion or build-up that could cause an issue with power. If the starter is defective, replace it.

If the gas cap is in good condition, usually the charcoal canister on the 9th gen 2002 to 2008 Corolla fails.

How to Fix EVAP Systems Issues

First, fix the gas cap’s condition. Remove the gas cap and inspect the gas cap seal for dry rotting, cracking, looseness, or torn and missing pieces. Replace the gas cap if the seal is bad or it has trouble tightening.

Symptoms of Cloudy or Worn Headlights

The headlights can cloud overtime from condensation. This can diminish the amount of light emitted.

How to Fix Cloudy Headlights

Headlights can be restored, but we recommend replacing the headlights if they are cloudy and don’t light up the road as well.

Fix Your Own 9th Gen Corolla

Fix and inspect your own 9th gen Toyota Corolla and other makes and models with install videos on 1aauto.com covering many repairs and diagnostics. 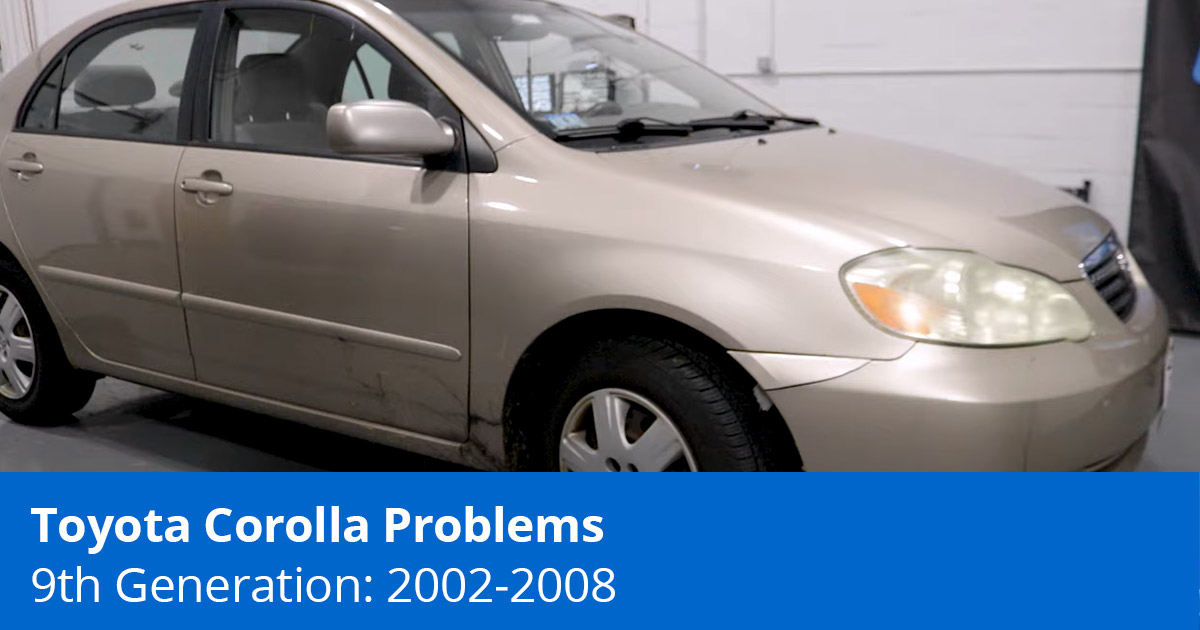 Article Name
The Most Common 9th Gen Corolla Problems | (2002 to 2008)
Description
This post reviews the most common problems with Toyota's 9th gen Corolla, years 2002 to 2008, like starting and idle problems.
Author
1A Auto Team
Publisher Name
1A Auto
Publisher Logo