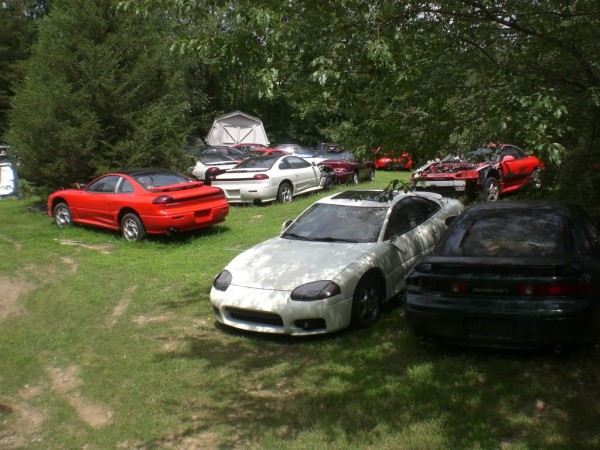 Back in my high school years, I knew of a reclusive man nearby that had an entire yard full of totally complete 1960’s Ford Falcons. There were probably more than 30 of them scattered around his yard with just few other models sprinkled in between. It was quite clear that none had moved in several decades because the vast majority had old plant growth securing them firmly to the earth below. I never did find out what his draw to Falcons was, but being a car guy, on some level, I respected it. Yes, I realize that he was potentially the reason that these cars would never see the road again, but that is not always the case, and not always a bad thing. It really depends on the situation. Maybe the Falcons were destined for the junkyard long ago, and he saved them from certain death in the crusher? Maybe he was storing them for a friend? Maybe he had already saved 100 of them, and these were the leftover real junky ones? Who really knows. The only thing we knew was that the dude had a lot of Falcons, and they may still be there.

Today, we have a more modern version of the story, but seen in a much happier light. This story takes place in Michigan, on Craigslist, and it’s a person with 50+ Mitsubishi 3000GT’s and Dodge Stealths. That, my friends, is a hell of a lot of lug nuts. He (I’m assuming it’s a “he”) has twin turbo cars, he has N/A cars, he’s even got factory red interiors for god sakes. How jealous are you? Be honest. The great thing, it’s all for sale! That’s right, he isn’t just hoarding them and watching them sink into the worms presumably like the Falcons. He is selling parts so that other cars can breath life again. It is the automotive life cycle and assuming that these cars weren’t mint when he got them, he is definitely doing the responsible thing, helping his fellow enthusiasts. Well done!

Are you this guy? Are you a car hoarder? Contact us and tell us about your collection at blog@1aauto.com! Seriously. The enthusiasts here are jealous and want to see more.

Oh and here is the Craigslist Listing if you need some 3000GT/Stealth parts.

Special Thanks to Jeff B for Spotting This!

15 thoughts to “Take a Look At Yourself. Are You Hoarding Cars?”