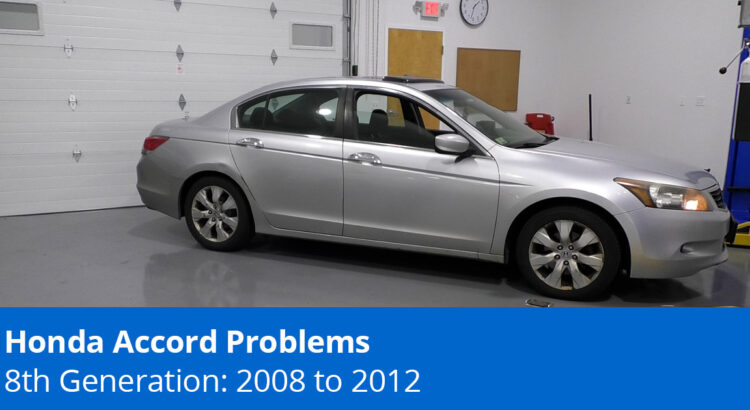 Diagnose and Fix Most Common 8th Gen Honda Accord Problems

The 8th gen Accord was released in the United States in 2008. It was longer and wider than its predecessor and was considered an executive car according to EPA standards. Like any other make and model, there are a few Honda Accord problems that are common to this generation.

The list provided below highlights the top 5 common problems that we’ve encountered in the 8th Gen Accord. Most of them are normal maintenance issues. They do not in any way mean that the Accord is a bad vehicle. Let’s dive in.

The Most Common Problems in the 8th Gen Accord

These are the top 5 Honda Accord problems we’ve encountered in the 8th Gen model. Most of them require simple fixes that you can do yourself. The 8th Gen Accord remains to be one of the most reliable models from Honda and an appealing choice for many. As such, don’t let these few maintenance issues hold you back if you’re looking to buy the car.

One of the most common symptoms you’ll notice is the vehicle stalling while driving. The battery warning light may appear on the dash to give you a warning before this happens.

When the engine is running, the alternator charges and maintains the battery to help supply additional electric power to the car’s electrical systems. The alternator is driven by the drive belt (serpentine belt) and you’ll mostly find it bolted to the engine block.

The alternator in the 9th gen Honda Accord tends to go bad after some time.

How to Fix Alternator Failure

If you find out that your battery is dead, it’s possible that the alternator was not charging it. You’ll have to charge the battery or in the worst-case scenario, replace it. The alternator should also be replaced. This will require you to remove the battery, serpentine belt, and cables that connect to it in order to access it.

Symptoms of a Bad Ignition Coil

The former has the coils arranged in a straight line at the middle of the engine while the latter has three both at the front and backside. If any one of them fails, you’ll end up with an engine misfire. The engine may start to shake and you may get a check engine light with a P0300-P0306 trouble code.

How to Replace Bad Ignition Coil

To replace an ignition coil, you’ll need to first disconnect the connector, take the securing nut off, and remove the bad coil. It’s always a good idea to replace the spark plugs as well when you’re installing a new ignition coil. This will help prevent any related Honda Accord problems in the future.

The crankshaft position sensor helps to monitor and maintain the rotational speed and position of the crankshaft in an internal combustion engine. In your 8th Gen Accord, you should find it underneath the vehicle where it is secured by a metallic plate.

Some of the Honda Accord problems you may notice when the sensor goes bad is seeing a check engine light on the dash or having a car that stalls or won’t start at all. In the no-start condition, the engine will only crank.

To replace a bad crankshaft position sensor, you’ll need to remove any securing plates and bolts, disconnect the electrical connector, and replace the bad sensor with a new one. A relearn procedure is also required. You can do this using a scan tool.

Symptoms of a Bad Catalytic Converter

The first thing you’re going to notice when you have a bad catalytic converter is a check engine light with a P0420 or a P0430 code. Another symptom would be a car that does not accelerate fast when you step on the gas.

How to Fix a Bad Catalytic Converter

You’ll need to confirm that you have no intake or exhaust leaks when diagnosing the problem. Once you’re clear, you can start by removing all the securing bolts to replace the bad catalytic converter.

One way to prevent this problem in your Honda Accord is to do routine tune-ups, change the spark plugs regularly, and replace any bad coils. Bad coils can release raw fuel to the catalytic converter causing it to overheat and plug up.

Symptoms of a Bad Blower Motor

The blower motor sends cooled or heated air into the cabin based on your AC settings. In your 8th Gen Honda Accord, you’ll find it located underneath the glove box on the passenger’s side. It is protected by a plastic cover that you would need to remove to access it.

The blower motor turns on every time you activate your HVAC. It works to push the air when you increase the speed of the fan. There are two main situations that will require you to replace the blower motor – when it’s making a loud noise or when it’s not working at all.

If you turn the heat on and nothing comes out of any of the vents, you definitely have a problem with the motor.

How to Fix a Bad Blower Motor

To replace the blower motor, all you’ll need to do is disconnect its electrical connection, unbolt it from its position, and replace it with a new blower motor. 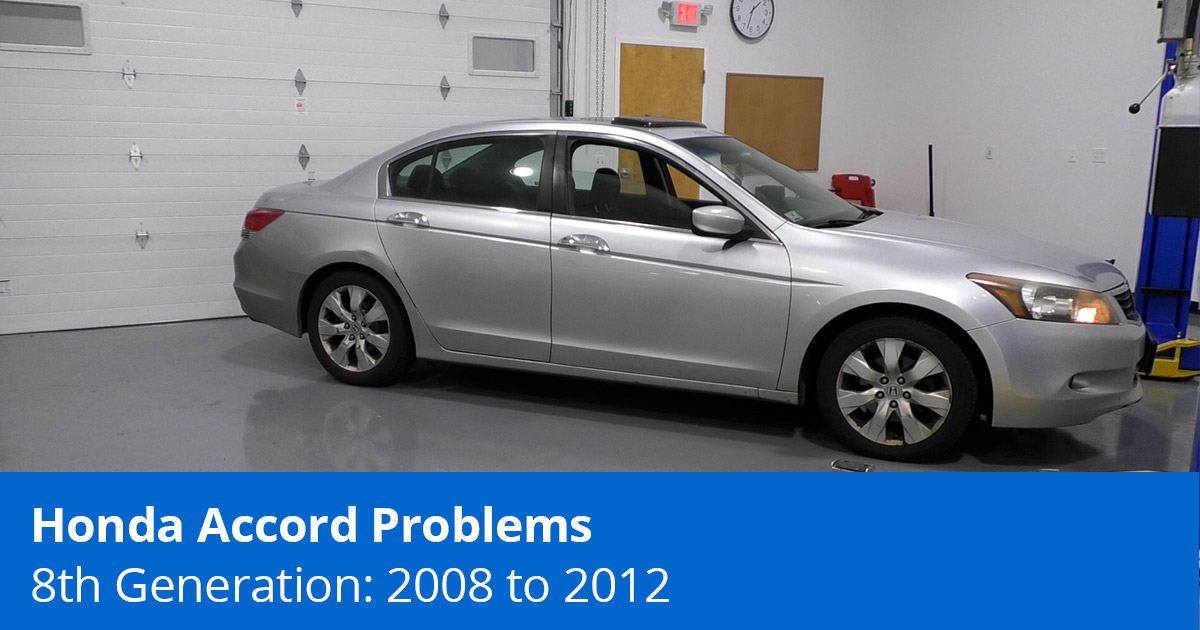 Article Name
2008 to 2012 Honda Accord Problems
Description
The 8th gen Accord was released in the United States in 2008. It was longer and wider than its predecessor and was considered an executive car according to EPA standards. Like any other make and model, there are a few Honda Accord problems that are common to this generation.
Author
1A Auto Team
Publisher Name
1A Auto
Publisher Logo