The Nissan Rogue is a popular SUV used by many as a daily driver, but that doesn’t mean it doesn’t have problems owners typically run into. This post and video reviews the most common problems with the Nissan Rogue’s 2nd generation of models, years 2014 to 2020, like transmission and heating problems and noisy struts.

A coolant leak, air in the cooling system, a bad thermostat, a clogged heater core, and sometimes mis-diluted coolant in the system.

How to Fix Poor Interior Heating

If the coolant is low, you might have a coolant leak. Check underneath the vehicle for puddles or coolant dripping.

Read more about how to check for coolant leaks

If the coolant level isn’t low and your Rogue has this issue, there could be an air pocket trapped inside of the cooling system, and it could be in the coolant hoses, engine, radiator, or heater core.

Air pockets can form, for example, if the cooling system is not bled after a part in it has been replaced. If there is an air pocket in the system, it will restrict the coolant from flowing and will need to be bled out. Restricting the flow of coolant will reduce the engine’s ability to cool itself, and it also means the coolant won’t be able to make its way to the heater core. The heater core will be less warm, and that means the blower motor will be pushing less warm air into the cabin.

To remove an air bubble, jack up the front of the car so that it’s at an angle. The air bubbles will float to the top and exit, and coolant will fill up the gap.

Read more about how to bleed the cooling system

If the thermostat isn’t functioning properly, it will also restrict the flow of coolant, and there will be less hot coolant in the heater core.

The heater core could also be clogged and may need to be flushed.

Read more about how to flush the heater core

A less likely but still possible cause is if the coolant isn’t diluted properly and is possibly too strong, it can restrict the flow of coolant, so make sure properly diluted coolant is in the system.

How to Fix CVT Transmission Problems

If your 2nd gen Nissan Rogue’s transmission is shaking or shuttering, check and replace the transmission fluid with the type that Nissan recommends for this transmission, which is called NS-3.

Flush out and remove all of the old transmission fluid, and replace it with brand new fluid. Then take the vehicle for a road test and see if the symptoms disappear. If they don’t, there may be an internal issue with the valve body, and we recommend bringing the transmission to a professional to have it fixed.

The strut caps sit where the strut mounts to the body, and in the 2nd gen Rogue they are designed with bearings so the cap can spin when you turn the wheel for better steering.

If the bearings are binding, rotted, or damaged, they can make creaking and clunking sounds, especially when turning. This can happen from driving over a lot of bumps or rough roads that strain the struts. Tightening the center nut can also damage the strut cap’s bearing and wear it out prematurely.

How to Fix Defective Strut Caps

Replace the strut cap. We recommend replacing both struts caps as a pair.

To replace the strut cap, you’ll have to disassemble the front strut. This can be a dangerous procedure since the coil spring is under pressure, and it can cause serious and fatal injuries if removed incorrectly. If you don’t have the proper tools like a strut compressor, we recommend replacing the entire strut instead with a preassembled assembly. After the strut is replaced, get an alignment for all four wheels.

If the check engine light turns on for code P0444, it means there is an issue with emissions system and the issue is at the rear.

How to Fix a Broken Canister Purge Control Valve

To diagnose the canister purge control valve, find where the valve is located near the black canister that is underneath the rear bumper on the passenger side.

The black canister has different valves. Check the wiring and see if it’s been damaged, chewed through, or has swelling or worn off outer sheathing. Replace the damaged wire’s wiring harness, or remove the destroyed wire and splice it.

If the wire is swollen or missing sheathing, the valve is shorting out and overheating and burning the wire.

For wiring that looks good, tap the valve a few times and see if it breaks free since sometimes the valve can stick. If that doesn’t fix it, replace the canister purge control valve.

Learn how to fix problems on your Nissan Rogue and other vehicles with our how-to videos that have step-by-step instructions to guide your diagnosis and repairs.

Read About More Cars and Parts 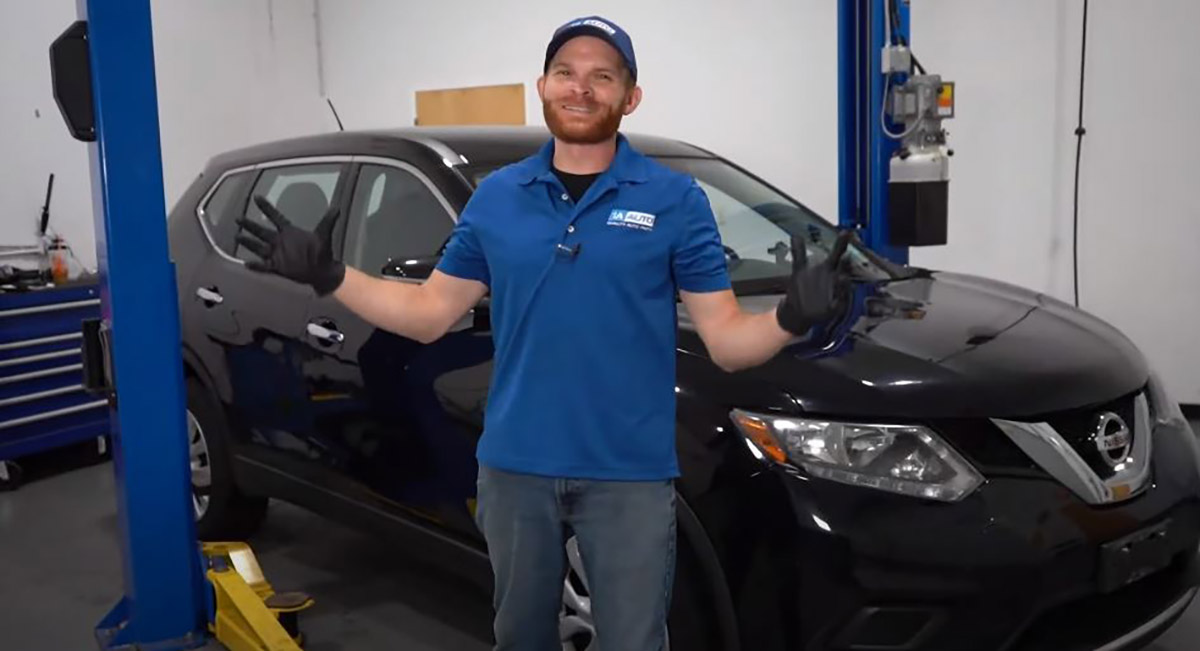