Corrosion on your car or truck’s battery terminals will cause resistance/restriction in between the battery and the battery cables that lead to important parts of the vehicle like the power control module (PCM), fuse box, or starter, and this can cause problems when trying to start. Your vehicle might not start at all, it might start slowly, or electronics like the headlights might malfunction. This post covers how to clean the battery terminals and other battery parts of corrosion with baking soda and battery terminal cleaner, what to put on the terminals to prevent corrosion, why batteries corrode, and more.

How to Clean Battery Corrosion

How to Clean Car Battery Corrosion

Pro Tip: Wear hand and eye protection. You want these on anytime you are working on a vehicle but especially around a battery.

If the gloves touch any corrosion, change them before touching yourself such as your face or eyes, or food or clothes.

How to Check the Battery Terminals for Corrosion

Why Is There Dirt and Debris on the Battery?

The debris on the battery is a mixture of dirt, dust, etc. and hydrogen gases lifting from the sulfuric acid, so you do not want this on your skin.

Signs the Battery Is Undercharging

Check the battery for corrosion. If there is corrosion on the negative battery terminal, the battery has been undercharging.

Undercharging can happen from driving for short periods of time with a lot of electronics on such as the wiper blades, the radio, etc. If draws from the battery are too large, the alternator will not have enough time to charge the battery, and corrosion will start to build on the negative battery terminal.

Signs the Battery Is Overcharging

If there is corrosion on the positive battery terminal, the battery has been overcharging.

Overcharging can happen from driving for long periods of time, like during a long distance travel, where the alternator is overworked trying to charge the battery. If the alternator has a bad voltage regulator, it will keep charging the battery, and corrosion will start to build on the positive battery terminal.

Check the Battery Cables for Corrosion

Any colors or blue, green, or red inside the battery cable means more than likely the cable is no good. A little corrosion can be cleaned off, but if there is excessive corrosion, the battery cable needs to be replaced—especially if it is on a newer vehicle.

Check where the cables connect. For example, if the battery cable is connected to the starter, there may be corrosion where the cable bolts on and the wiring, which tends to turn green when corroded. This creates resistance, and over time the wiring will fray and break.

We recommend replacing the entire battery cable. While common on older vehicles, if the bolts on the universal terminal connector are not tight enough, the cable can wiggle around or out of the terminal and cause an intermittent connection. Moisture can also travel inside the wiring and create resistance.

Test the Battery Debris with a Multimeter

With a multimeter, place one lead to one cap and the other lead to the other cap. Take a reading. If the voltage jumps up to, for example 4.4 volts, which is a lot, the collection of hydrogen gas, debris, and dirt is holding current, which will be grinding out and putting a consistent draw on the battery.

If the battery has that collection of dirt and debris and the battery charge keeps decreasing, it’s likely not an internal issue with the battery but more of a vaporization problem on the battery from overheating or overcharging. The current will make its way into the air, decreasing the life of the battery over time.

How to Remove the Battery

How to Remove the Battery

If you have access to one, a battery memory savor will help save set radio stations and make sure the parameters in the vehicle’s computer aren’t deleted to prevent resetting the readiness monitors. It will also act as a surge protector for the vehicle’s electrical system in case you remove the negative battery terminal and it drops and bounces on the battery terminal a few times, there will be no concern about blowing fuses and/or the brain of the vehicle.

How to Remove Battery Corrosion

1. Place the Battery Into a Catch Bucket

Place the battery into a catch bucket. This will catch any excessive cleaning fluid. Some clean the battery with hot water and baking soda, but that might travel into the battery cells under the cars and contaminate them, neutralizing and destroying the battery.

2. Clean Dirt and Debris from the Battery Surface with a Brush or Plastic Scraper

We recommend cleaning the surface with a brush or plastic scraper that’s not so long it may contact both battery terminals/posts at the same time. Remove any corrosion from the battery surface.

Optional: Clean Dirt and Debris from Under the Vent Caps

Battery cells sit underneath the caps. If removing the caps to clean any outlining corrosion, do not get any debris inside the cells, and do not touch the sulfuric acid inside or have flammable objects near it. Not having a good seal between the cells and the cover can cause future problems with battery health.

Battery terminal cleaner will have an additive that changes the color of the corrosion to identify it for removal.

A common way to clean the battery terminals is with hot water and baking soda.

Note: Excessive baking soda can also mix with corrosion on the battery, fall to the ground and contaminate the environment.

After the terminal connector is cleaned, check its condition. If the terminal feels like it is falling apart because of thin metal, it needs to be replaced. Clean the inner portion and the contact points and reinstall the terminal if it’s in good condition.

Clean the Inner Portion of the Terminal Connector

Clean the inner portion of the terminal that connects to the battery post with a metal brush.

Pay attention to the wired area that will be crimped down by the terminal end. If there is blue or green inside the terminal or after wiggling it, any wiring that is corroded or falling apart, or is weak and fraying, the entire harness in most cases needs to be replaced.

4. Clean the Battery Terminals with a Wire Brush

Clean the terminals/battery posts even if they do not appear to have corrosion. The terminal can have a coating that can affect the connection.

Place a terminal end brush/cleaner on the terminal end, twist it, and clean the corrosion off the battery terminals until all the parts are clean.

Clean the battery cable of corrosion with a sanding disk to remove the corrosion. If the tool is air -based, the corrosion could blow around in the air. If breathed in, it will cause respiratory problems. Cleaning the cable/terminal connectors with sand paper may take longer but it is effective.

6. Clean the Battery Hold Down

Clean the battery hold down with corrosion spray or baking soda and water and remove any corrosion.

7. Remove Corrosion from the Brushes

Rinse the brushes of any corrosion to prevent rust from accumulating and damaging the brush.

How to Prevent Battery Terminal Corrosion 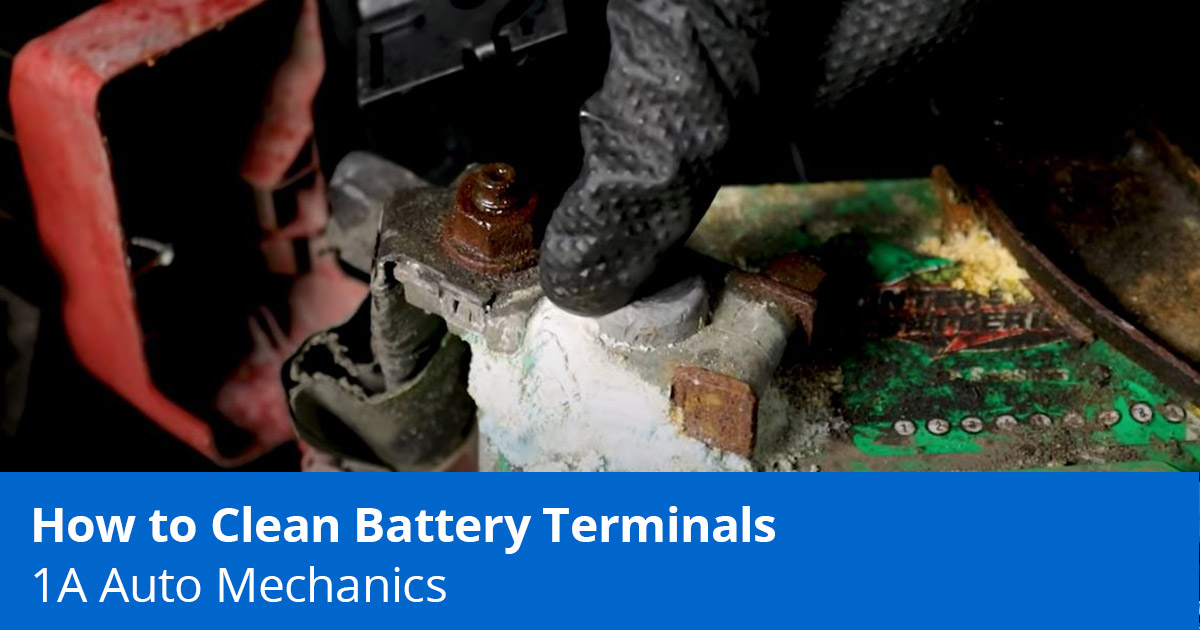 Article Name
How to Clean Battery Terminals | Steps to Remove Battery Corrosion
Description
If your car or truck has battery corrosion, this post reviews how to clean battery terminals from corrosion with baking soda and other methods, how to prevent corrosion, and more
Author
1A Auto Team
Publisher Name
1A Auto
Publisher Logo