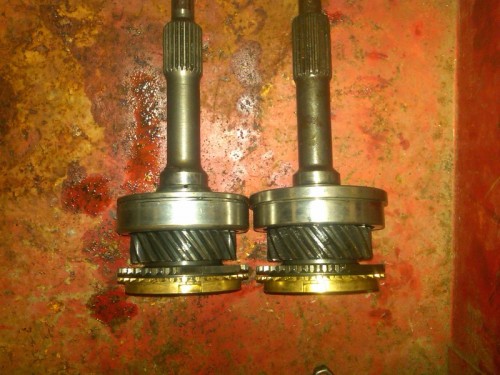 Last week I wrote about how I broke the KM132 transmission in my truck.  Luckily for me, I am an auto parts hoarder, and had a couple spare KM132 transmissions “just in case”.  My life isn’t as easy as pulling the old transmission out and slapping a spare one in though because the one in my truck was fairly heavily customized.  Not only that, but the spare KM132’s I had were intended for a wide block…. You know what, let’s back up the train a bit.

Back in the 1980’s Mitsubishi … ehem … I mean Dodge was putting 2.0L’s and 2.6L’s in many of their rear wheel drive vehicles.  Both engines were backed by either an automatic or a “KM132” 5-speed manual transmission.  The 2.0L KM132’s were known as the “narrow-block” bolt pattern because the bell housing bolts were closer together than that of the 2.6L “wide-block” bolt pattern.  Simple enough right?  Well this is where is gets crazy…  My truck originally came with a 2.6L and a wide-block KM132.  I then ripped out the blown up 2.6L engine, and swapped a 1991 Eclipse 4G63 2.0L engine into it (which is a narrow block).  This meant that I needed to use the “narrow-block” KM132 in my truck.  I grabbed one from a junkyard, heavy modified it, and about 11 years later (last week), I broke it.  Oopsy.

Now, I made the assumption that the spare 2.6L KM132 transmission had the same internal components as my narrow-block KM132 that I broke.  That way I could swap the internals and be back on the road in short order.  I was sort of right.  The bearings are the same sizes (except for 1), but different styles. The clutch and driveshaft splines are the same too.  Then I discovered the really interesting thing that has been rumored for years. The wide-block KM132’s has wider gears than the narrow block did.  This basically told me that once I swapped the wider internals into my busted transmission, I would actually end up with a stronger transmission! Nice!  Well, that is assuming that it works when I’m done.  The other night, I took a couple pictures for comparison porpoises (like a dolphin).  One picture came out ok, and the other appears to be lit up by 10 billion candlepower flood lights.  I have no idea why this happened because I didn’t change the camera settings, and the photos were taken just minutes apart in the same exact spot.  See? Cameras really do hate me.  Any who, in each picture, notice the width of the gears on the right (wider) vs. the gears on the left (narrower). Cool stuff right?