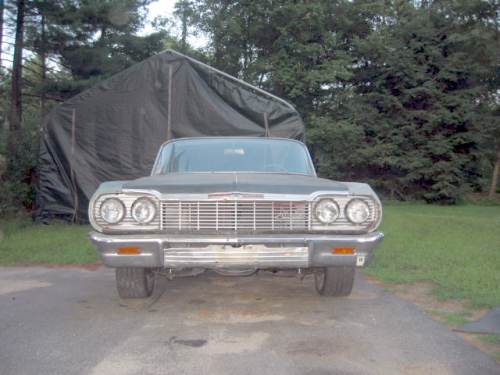 I can’t speak for everybody, but I know that I love build threads.  When I read about what other people are working on, breaking, and racing, I get all amp’ed up and ready to weld the nearest object to me.  Watching a vehicle go from a total rust bucket to a weekend driver or show car is inspiring and often gives me the motivation I need to work on my own junky projects.  Just last weekend I read 192 pages of a build thread on The Samba about a 1938 VW beetle found in Lithuania. It literally took me a few hours to read, and it was quite possibly the most impressive forum thread I have ever witnessed.  When I was done reading it, I wanted to give somebody, anybody a round of applause.  My cat Malibu pranced into the room and was excitedly cheered on by me.  She assumed that she had won a major award, but really I was just in awe over the fantastic fabrication skills on the ’38 Beetle.  Bottom line is, when it comes to nice metal, I’m excitable.

My Impala project is the pinnacle of my metal obsession.  It is everything that I love and hate about cars mixed into one, but I have had it for half of my life, and it is stable.  No matter what I do or where I go, I know my Impala will still be there for me to wrench on when I have the time & motivation.  Recently, I was at an all time record of number of working vehicles in my yard, so I decided it was time to focus my efforts on my old Chevy again.  I spent about 18 hours working on it last weekend, and made a fair bit of progress, so I was thinking of turning the progress into a regular update on the 1A Blog.  That way, you guys can keep me in check, throw ideas at me, and help a rusty car hit the streets again.

Before we talk about the most recent progress, I need to back it up a bit so that you know how I got to where I currently am.  It began when I was 15.  I bought a ’64 Chevy Impala Convertible from the original owner in Wayland MA.  It had lived the first 33 years of its life on a dirt driveway, and was parked in a dirt floored carriage house. (Yea, I said carriage house). Needless to say, the bottom half of the car was in rough shape.  The fenders, doors, rockers, quarters, and floors were all rotted badly.  Along with that, it was tapped in the back left corner at some point in time, which folded the rear quarter quite nicely.

When I was 16 or 17 (read: “young and foolish”), I took on the task of welding a new quarter panel patch in place of the  giant dented section. What a terrible idea that was. When I was done, it definitely looked better to 90% of the world population, but I absolutely despised it. I hated how you could see a patch on the inside of the quarter panel, and how if you ran your dusty hand over the exterior surface of it, there was a very gentle raised area that was not going to be acceptable.  The quarter panel haunted me for the next 10 years, and by 2008, enough was enough.  I cut the entire thing off and hoped that I hadn’t just made a horrible mistake.