Most car enthusiasts hate rust with a passion, because once it starts it never seems to go away.  However, growing up in Massachusetts, you quickly realize that cars without rust don’t exist in our area, and rust is just a part of life.  Naturally, I want to do everything in my power to have a rust free car, and last summer, I found some rust hiding in the deepest darkest regions of my 1964 Chevy Impala.  Describing where this metal came from is somewhat tough, but I’ll do my best.  Ok, imagine a 1964 impala (sweet right?), now open the gas filler door.  You see the filler pipe with the gas cap on the top of it.  Surrounding that pipe is a piece of metal that is welded to the inside of the outer wheel house.  This is THAT piece!  Naturally water collects in there and rots out the whole area.  I wasn’t having that so I tore it all out and began the rebuild.

First I removed it from the car and evaluated the situation at hand.  The outer perimeter was completely rotted out and needing replacing.

I then cut all the edges off of it and began making replacements from flat sheetmetal.  You can see where I welded the new pieces in on the back side in the next picture.  With some of the compound curves, there is some metal stretching and shrinking involved.  This can be done with hammers and dollies if you are really good, or you can buy yourself a metal stretcher & shrinker to make the job 1 million times easier.  In any case, new pieces were then welded in and ground down to make them pretty again.

Then I decided that the easiest way to clean it up completely was to blast it with some extra fine sand.  So blast I did. 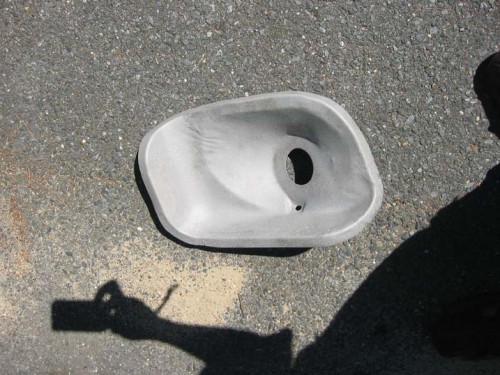 With a little bit more massaging after this picture, it was completed, and then spot welded back into its happy home.  See, rust isn’t so bad after all!

4 thoughts to “See! Rust isnt so bad after all.”