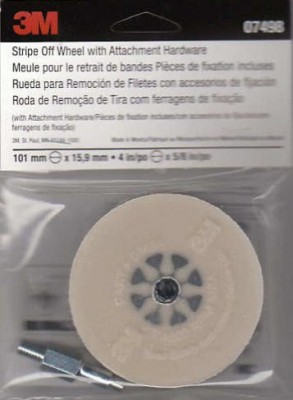 The other day, our very own Scott Young was needing to remove some fancy factory striping on his 1985 Pontiac Fiero GT.  Why? Well, it’s a long and complicated story.  Let’s just say that he and I swapped his car from a notch back to a fast back, and we replaced a few lower body panels at the same time.  Some panels had stripes, others didn’t, and it looked completely ridiculous.  As much as I love stripes, even I knew they had to go.  However, I also knew the dangers of removing stripes with heat and a razor blade.  I have a nasty scar on my finger to prove it. 11 years later and I still cringe thinking about that hospital trip.  LUCKILY!  Scott found a much, much better way of handling this task than I did so many years ago.

Normally when you buy some kind of device that is supposed to relieve you of a difficult task, it ends up failing you, and somebody ends up injured.  3M doesn’t play that game.  Whenever I buy something that is made by 3M, I remember just how superawesomefantastic they are.  (I even save my 3M brand electrical tape for special occasions in the garage, like when I want my wiring harness to look extra nice.) Now Scott, also a 3M fan, purchased the “Stripe Off Wheel” (Part # 07498).  He tried it on his car briefly 1 night to  prove its worth, and promptly sent me a text message telling me how it worked out in mathematical terms.

“This stripe remover = Soffet Cutters x Vice Grips + Quick Grips to the power of the Plasma Cutter”  (All his favorite tools.)

He also said that he was 100% sure that the Stripe Off Wheel was the absolute best tool that he has ever owned. That’s a bold statement considering his passion for Vice Grips.  The following weekend he brought the stripe off wheel and the Fiero over to my place so that I too could witness how amazing the tool was first hand.  I was impressed to say the least. I even took a video.

Can’t see the video?  Here is the link: http://www.youtube.com/watch?v=VvlDNUPn-wU

Well, there it is, a totally free endorsement for a superawesomefantastic product that we don’t even sell.  It cost Scott something like $28 and it saved him at least 10-15 hours of frustration and a minimum of 1 trip to the hospital.  That tool is worth its weight in gold. You win again 3M! … you always do …

5 thoughts to “The 3M Stripe Off Wheel Does NOT Disappoint.”