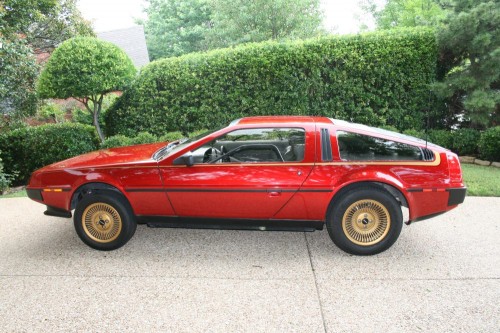 A few months ago, we talked about a Blue Painted Delorean that had a colorful, yet unconfirmed history with it.  With some of our DMC expert readers chiming in on the topic, along with the owner himself, the story evolved into a far more legitimate sounding tale.  Today I am bringing to you a sweet candy colored, DMC-flavored first hand confirmation to one of these legends.

Let’s begin with a short review of the story that we originally heard shall we?  The original legend said that John Delorean’s brother wanted a painted car instead of the sterile stainless look that everybody else had.  So he had several of the new DMC’s painted different colors of the rainbow, and then he picked the one he liked best for himself. The others were sold off as fancy painted Delorean’s. Sounds a bit bold, but plausible right?

Yea that story is apparently a lie.  The real story goes that Delorean Cadillac in Cleveland Ohio, back in the early 1980’s, had some Delorean’s on the lot that they were having trouble selling.  Rather than giving them away at a loss or sitting on them forever, they decided that maybe people would like them better if they were more colorful.  The problem was that you can’t just squirt paint on stainless and expect it to stay there.  Stainless is way cooler than that.  So Delorean Cadillac had PPG (or SWP?) come up with a paint that would adhere to the stainless. They succeeded and before long, several DMC’s were painted a variety of fun colors.  We’ve heard about a red, purple, and blue one, though I’m sure others exist as well.

The Delorean we have pictured today is owned by a great guy named Dave and his extremely cool wife.  She bought it brand new for about $20K with the candy apple paint and gold trim already on it. He says that it was the only way that she would own one.  As you can gather, it was in fact, one of the legendary painted ones!  It still has the original V6 and 5-speed manual transmission, with about 15K miles on it.  He said the paint job has a few nicks, but is still in great running condition.  From my seat, this car looks like DMC perfection. Dave also says that everything has a price, so if you are seriously interested, email me at blog@1aauto.com, and I will pass your message over to him.

Special Thanks to Dave for confirming the story, and sharing the beautiful Delorean with us!

8 thoughts to “You Want To See The Candy Apple Red Delorean?”