In this post, we explore the top 5 Toyota Tundra problems in 2nd generation model years 2007 to present. If you own a 2nd gen Tundra or are looking to buy one this article can show you things to look out for including issues with ignition coils and front hub bearing.

The 2nd Generation Toyota Tundra comes with two secondary air pumps. They are located right underneath the passenger side and behind the fender well. This makes them easier to access, unlike most vehicles that have the air pump located underneath the intake.

The work of the secondary air pumps is to send air into the exhaust system for emissions purposes. This happens when you first the vehicle when it’s cold and helps to reduce the amount of carbon that comes out of the tailpipe. The process is important since the engine never achieves 100% efficiency during combustion.

When the secondary air pumps fail, the only symptoms that you’re going to notice are a Check Engine light and a failed emissions test. You’re not likely to see any drivability problems. To fix the issue, you can clean both air pumps in your Toyota Tundra, replace them, or check the related inlet hose and fuse.

The ignition coils on the 2nd gen Toyota Tundra are responsible for giving the spark plugs the spark they need to ignite the air-fuel mixture during the combustion process. They are located on top of the valve covers in the Toyota Tundra. They are one of the most common problems that you’ll experience as a truck owner.

Some of the symptoms that you may notice include an engine that runs rough, a flashing Check Engine light, engine misfires, decrease in power, difficulty starting the engine, and poor fuel economy.

To replace any of the coils, all you’ll need to do is disconnect the connector and pull out the bolt that holds the coil. It’s advisable to also replace the spark plugs whenever you’re working on the ignition coils.

Front wheel hub bearing vibration is a top 2nd gen Toyota Tundra problem. What you want to look out for are noises that intensify when you turn either to the left or right. A bad front hub bearing is normally caused by contamination from dirt, dust, water, and other contaminants.

Vehicles that spend most of their time in cold climates will experience contamination from magnesium chloride and salt. To diagnose the problem, you’ll need to raise the vehicle to a height that allows you to check the wheel.

Grab the wheel and tire assembly at the top and bottom and give it a shake. If you notice any excessive play, most likely it’s coming from the hub bearing. Bearings can sometimes make noise without excessive play. As such, you may need to also spin the wheel to diagnose the problem. You can hold the coil spring while at it to feel for any vibration.

O2 sensors help the engine to determine whether the air-fuel ratio has too much oxygen or not enough oxygen. The second-generation Toyota Tundra has four of them. The first two are located in front of the catalytic converters and the other two right behind them.

Knowing the amount of oxygen that is in the car’s air-fuel ratio helps the engine to make adjustments accordingly to ensure the vehicle runs smoothly. When you have a problem with the rear O2 sensors, the only symptom you’re most likely to notice is a Check Engine light. You’ll need to replace them to fix the problem.

However, when it comes to the front O2 sensors, you may get drivability issues in addition to the Check Engine light. It’s advisable to replace all O2 sensors at once if you have a problem with just one. This helps with the vehicle’s gas mileage performance.

Due to heat and continuous expansion and contraction, the metal tends to warp and crack after some time. This leads to an exhaust leak that is mostly characterized by a ticking sound when you’re driving down the road. The sound is caused by gases being forced out of the manifold.

To diagnose the problem, you’ll need to check for cracks around the bolts that secure the manifold to the engine head. Sometimes, gas leaks can tamper with the engine’s performance. The only way to fix the problem is to replace the manifold. Remember to get new gaskets as well. 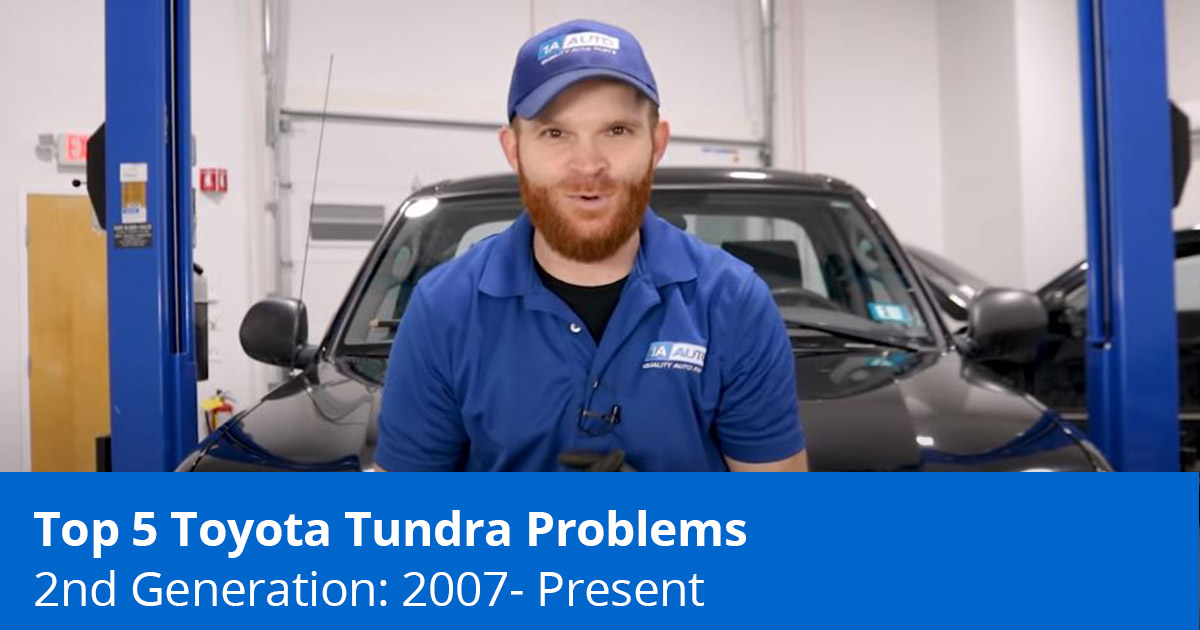 Article Name
Top 5 Toyota Tundra Problems - 2007 to Present - 1A Auto
Description
In this article our expert mechanics explore the top 5 Toyota Tundra problems. There is nothing wrong with the 2nd gen Toyota Tundra, however, If you own one or are looking to buy one this article can show you things to look out for including issues with ignition coils and front hub bearing.
Author
1A Auto Team
Publisher Name
1A Auto
Publisher Logo