The Chevrolet HHR is a unique crossover that differentiates itself from the crowd with its high-roofed and retro-styled exterior. Its design was inspired by the early pickups and SUVs that graced our streets in the early 1940s and 1950s. For its first-generation model, Chevrolet equipped it with several standard features. We’ve compiled a list of some of the top 5 Chevy HHR problems that we have come across in the car. This includes some of the most common failures and tips on how to prevent and repair these issues.

Some of the symptoms that you’ll get when the VVT solenoid valves go bad include an engine that’s running rough, a check engine light that generates trouble codes related to the valves, and a vehicle that stalls in severe cases.

How to Fix a Faulty VVT Solenoid Valve

The VVT solenoid is responsible for monitoring the engine’s needs according to the amount of oil pressure inside it. It then adjusts the camshafts accordingly to open and close the engine valves.

The best place to start when fixing the problem is to check the oil level. The valves are not going to work properly on low oil. Make sure that the oil you use is clean since this helps the valves to operate at optimal performance.

Symptoms of a Bad Throttle Body

The most common symptoms that you’ll get when your throttle body goes bad in your 2006-2011 Chevy HHR include rough idles, an engine that runs a little rough, a check engine light that shows throttle body related codes, and even a stalling condition.

How to Fix a Bad Throttle Body

The throttle body is the part that controls the rate of airflow into the engine. In most cars, it’s located between the engine manifold and the air intake. It ensures that fresh air mixes with the right amount of fuel to allow the combustion process to take place.

You can clean the throttle body if the problem is not too severe. However, the best solution would be to replace it.

How to Fix Coolant System Issues

The coolant is known to plug up the heater core or the radiator. You may try to flush out the heater core, but this rarely solves the problem and you may just have to replace it. To stay in the clear and prevent problems related to the coolant system, change the coolant more often.

Most of the problems that you’ll have with the gas cap will first appear in form of an EVAP code with a check engine light.

How to Fix a Bad Gas Cap

You want to also ensure that the gasket inside is still in good condition. You can remove it and stretch it out to see if there are any cracks. Test the gas cap’s ability to ratchet. Replace it if you need to.

The 2006-2011 Chevy HHR comes with an electronically assisted power steering. You may notice that it stops working properly when you jump start the vehicle. This is often caused by a wrong jump starting procedure.

If you were to take a look at the fuse box cover, you’ll find the right procedure on how to jump start your first-generation Chevy HHR. Not following this procedure results in a blown electronic power steering fuse.

This is a yellow 60 Amp fuse found at the corner inside the fuse box. You’ll need to replace it and double-check your power steering to ensure it’s working as it should. 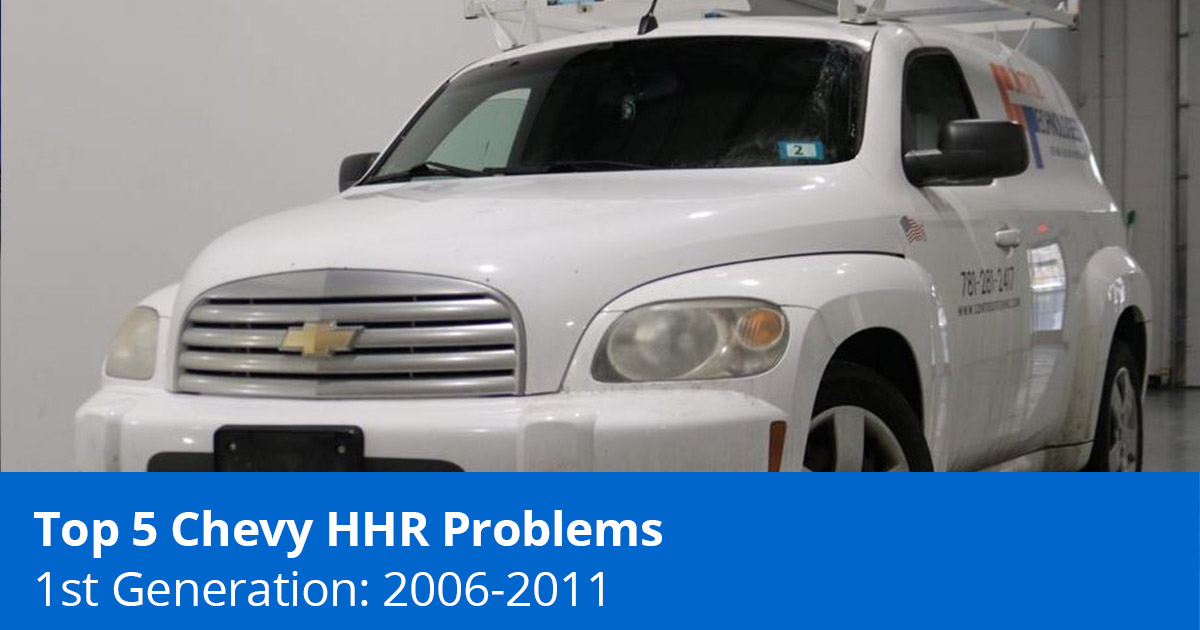 Article Name
Top 5 Chevy HHR Problems - 1st Generation (2006-2011) - 1A Auto
Description
We’ve highlighted the top 5 common 2006-2011 Chevy HHR problems of the 1st generation that our expert mechanics have seen. Learn what you can do to fix them yourself.
Author
1A Auto Team
Publisher Name
1A Auto
Publisher Logo