The 6th generation Nissan Sentra is a mid-size sedan that comes with plenty of cargo volume and space. With proper maintenance, the car can last you more than 200,000 miles. It’s also estimated that you can get up to 70,000 miles on it before doing any major repairs. We compiled a list of the top 5 Nissan Sentra problems that we’ve seen in the 200 to 2012 models. If you own the car or are looking to buy one, this will help you know what to expect. With that said, let’s dive in.

When the ignition coils go bad, some of the symptoms that you’ll get include an engine that’s running rough and a check engine light that may be flashing.

How to Fix Bad Ignition Coils

The ignition coils in the Nissan Sentra are located just underneath the intake plenum. They increase the voltage they receive from the battery to help create a spark that ignites the fuel and air mixture inside the engine.

You’ll need to remove the intake plenum to access the ignition coils. The best option is to replace them together with the spark plugs and gasket.

Symptoms of a Bad Throttle Body

Some of the symptoms that you may notice when you have a throttle body that has gone bad or one that is almost failing include a rough idle, an engine that struggles to accelerate, and a Check Engine Light that generates a throttle body trouble code.

How to Fix a Bad Throttle Body

The throttle body controls the amount of air flowing into the engine. This helps to ensure that there’s enough air for combustion—especially during acceleration. The throttle body is located right in front of the intake plenum in the 6th generation Nissan Sentra.

In some cases, you can get away with just making sure that it’s clean. You may also be required to replace a sensor if the check engine light generated a sensor-related code. It’s not safe to drive a car that has a bad throttle body. It can cause stalling and create a safety hazard.

How to Fix a Bad Mass Air Flow (MAF) Sensor

Replacing the mass airflow sensor in the 6th generation Nissan Sentra is a fairly easy job. All you’ll need to do is disconnect the connector, take out the screws that hold the sensor in place, and replace the old sensor with a new one.

Symptoms of a Bad Blower Motor

If the blower motor goes bad, it may make noise when you turn on your climate control settings or fail to operate as it should.

The blower motor is a fan that is used to push cooled or heated air through the dashboard vents and into the cabin. It does this according to the climate control settings selected.

The blower motor is located in the middle of the dash in the 2007-2012 Nissan Sentra. You’ll need to access it from the driver’s side by removing the gas pedal and brake pedal assembly. While working on it, you’ll also need to check the blower motor resistor as that tends to also go bad.

The front hub bearings are a set of steel balls that help to reduce friction where the wheel hub connects to the metal axle shaft. When they go bad, the wheel loses friction and the metal parts start to grind on each other.

One of the symptoms that you’ll notice when you have bad front hub bearings includes hearing excessive noise coming from the front of the car. The sounds may mimic those of a jet plane and may change as you turn left or right.

How to Fix Bad Hub Bearings

To diagnose the problem, you’ll need to raise the vehicle, grab the tire from top to bottom and give it a shake. You want to check if there’s any abnormal movement in the tire. You can also grab the coil springs and spin the tires. If you feel vibrations in the coil spring, you’ll know that the hub bearings are indeed bad.

Replacing your wheel bearing is a job that will require you to remove the wheel and the brake assembly. This will allow you to access the outer and inner wheel bearings. Remember to rub some grease into the bearing when installing the new ones. 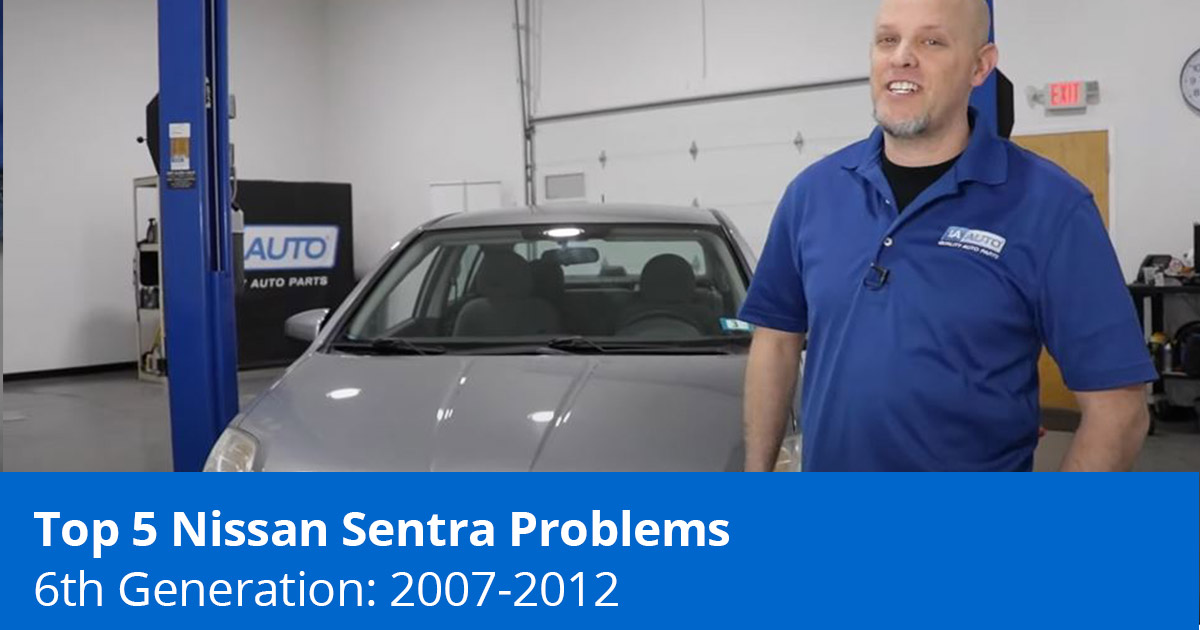 Article Name
Top 5 Nissan Sentra Problems: 6th Generation (2007-2012) - 1A Auto
Description
Here are the top 5 most common problems that we have seen in the 2007-2012 Nissan Sentra. Check out their symptoms and probable fixes.
Author
1A Auto Team
Publisher Name
1A Auto
Publisher Logo