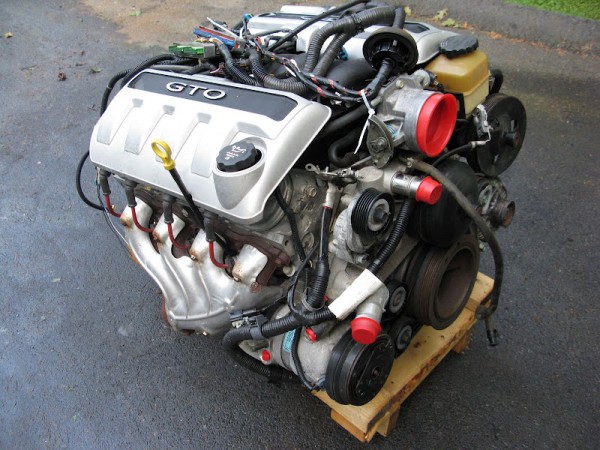 Great, now that I have your attention, what you are about to witness is pure automotive hottness at its very best. There’s beautiful fabrication, a beautiful car, a beautiful engine, and an overall beautiful build thread. The whole event took place over on MotorGeek, and if you have a spare hour or so, you will definitely want to read through the entire build thread. It’s dang near incredible. Here is the short story.

A user known as “timmmy” got a great deal on a 2003 Audi RS6 that had a missing twin turbo engine. He decided that rather than replacing it with a very expensive factory replacement, a 2004 Pontiac GTO LS1 v8 would be the best candidate to go in its place. The best part?  He also swapped in manual transmission and kept the all wheel drive. For-The-Win. Absolutely ideal daily driver in New England? Yessiree Bob… err… should I say “Judas”? I forgot to mention that, this project is named Project “Judas”.

Now it’s one thing to plop this GTO engine into a 70 Chevelle, but a totally different game to surgically slide it under the hood of an awd Audi RS6. Mechanically, this engine swap had a unique set of challenges that you might expect, like relocating the transmission further rearward, modifying axles, and just basically making space for 4 more inches of engine under the hood. There was plenty of awesomely fabricated parts to make this happen. Transmission cross-members, engine mounts, accessory brackets, the whole shebang. The majority of the parts were made of aluminum, and if you have been reading the 1A Blog for a while, you know that I’m a sucker for TIG welded aluminum.

Fuel Injection. For those of you that have done fuel injected engine swaps before, you know that it has its own variety of challenges that carbureted engines don’t have, like ohhh, about 4 million wires. Not only that, but this builder then had to connect the LS1 engine harness to the Audi harness and have them play merrily. That way he would have a dashboard, OBDII port, and engine accessories that actually worked like they were intended. That takes some serious noggin power, and is almost always the most frightening part of a car build.

Within the build thread, there are probably hundreds of pictures, many videos, and great automotive banter throughout. I grabbed a few to share with you today, but really you need to check out the complete thread. It’s everything you want and more.

You  know I grabbed my favorite video as well right? Here, he tests the Audi RS6’s new launching capabilities and LS1 rev limiter.  They work!

Special Note To MotorGeek Guys:  I fixed the “slight” error on transmission swap 😉 My bad.